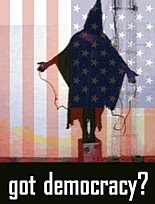 I posted my last entry (read that entry below... "We the Sheeple") on Yahoo-360. The only responses I got were from the same person. I'd like to post his first response.

Aside from the grammar issues, I have no problem with his response. In fact, he CLEARLY proves to me WHY we need not be in this war. If we have problems right in our own land, WHY are we in someone else's country, raising havoc? That's a no-brainer.

Every Saturday on public access TV, they show a speech given by Minister Farrakhan. I tune in ALL the time to hear the knowledge he spits. Today's speech FOCUSED in on the United States government, specifically the CIA and how they INTENTIONALLY seek to destroy any kind of movement that is not in the interests of corporate America. He also went on to say that this is done internationally as well. They prepare the replacement then oust the person in charge. Think SADDAM HUSSEIN. Now America is in Iraq and the general public thinks we should be giving the people of Iraq a democracy. Is that what they want?

Does democracy mean freedom? Has democracy been a good thing for America? Democracy wasn't the intent of the founding fathers of this country. We are a republic. In a republic, the people are the MASTERS and the government is his servent. In a democracy, the will of the majority is law. Anything is allowed so long as the majority approves. A lynch mob qualifies as a democracy.

Democracy, n. "A government of the masses. Authority derived through mass meeting or any form of "direct" expression. Results in mobocracy. Attitude toward property is communistic - negating property rights. Attitude toward law is that the will of the majority shall regulate, whether it be based upon deliberation or governed by passion, prejudice, and impulse, without restraint or regard to consequences. Results in demagogism, license, agitation, discontent, anarchy."

Interesting. The U.S. Army has been successful in instituting democracy in the Middle East. The results are demagogism, license, agitation, discontent, and COMPLETE and TOTAL ANARCHY.

I'm not sure if I even addressed the issues that bruh man brought to me, as was my original intent with this post. However, I got a lotta things off my chest that I felt like speaking on.

I love it when you speak your mind.