I must be PMS'ing because my heart is needing some affection. My hand is wanting to be held and all I want to do is cry.
on October 31, 2010 3 comments:

Life has been so  busy lately. I've put off blogging in favor of doing all the other things I do.

There are several projects on the table right now.

Project #1: Acquiring/ Launching my first "real" business. I'm partnering with my dear cousin to acquire an established business in the area. I'm super excited. She is too. The only thing missing is the funds. I've been rejected a ton of times already because of the student loans on my credit report. I'm bummed but not at all dampered by it. I KNOW that someone out there wants to gift or loan me the money. Even a co-signer would work wonders. **sigh** This has been my mantra lately (from the book One Minute Millionaire

) "Every resource I need is possessed by someone, somewhere, at this very moment." My add on: "Lead me to these individuals. The resources will fall into my lap."

I have been brainstorming all the ways we can acquire the needed cash to purchase the business. We've been tossing around the idea of borrowing money from our friends and family then paying 1% interest on it. Another idea is to acquire gold and sell it to a refinery. Gold is like $1300 per ounce. That is terrible inflation but good if I need cash now. Any ideas you have on how to acquire money for a business would be great. I tried going through OHA but it takes 6-8 months processing time. ugghhhh!!! A dear friend suggested we have a plate lunch sale to raise the necessary capital. I'm seriously thinking about it. I mean, it wouldn't hurt.

Project #2: My bachelor's degree. As much as I would love to say that I love school -- I really don't. I think the way education is set up now is just so backwards. More on that later because that topic really needs to be explained in greater detail. I will have earned a Bachelor of Arts in Philosophy within a year. My estimated graduation is July 2011. Can you believe that? It took me two years to get this done. I can hardly believe it. I was thinking of continuing on to earn a Masters in Pacific Island Studies from the University of Hawai'i... I'm still thinking about it. What would be the benefits for continuing on when really, all I want to do is be a business owner and WRITE, WRITE, WRITE. If I could count on Kamehameha Schools to foot the entire bill for my education, I think I would probably do it. We'll see.

Project #3: The Danielson Family Reunion. Aigatupu and (Tasi) Gustav Danielson (my maternal grandparents) and all the posterity are converging on the island of O'ahu in July 2011. How did I get placed in this position again? My cousin Marie and I were in charge of the 2008 reunion. How are we charged with planning it again. I know the next one will not be conducted by me. I'm pooped and busy already.

Project #4: The Tai Hook Family Reunion. Lizzie and James Tai Hook (my paternal grandparents) and all their posterity are converging on the island of O'ahu in October 2011. Long story on how I was assigned this project. It was originally my idea but I had slated this for October 2010, which would have been this month. However, my aunt wanted to push it back to October 2011 for whatever reasons. I told her if we did that then I couldn't be in charge of it because I had so many other projects slated for 2011. Well, the other day I get an email from her saying that she would like me to take over again. ugghhh!! In any case. My irritation with her WILL NOT prevent me from doing this for my father. It will all work out EXACTLY as it should.


Well... that's been the "goings-on" in my world. I promise to get back to the blog challenge as soon as my life slows down again. The holidays are approaching also and I'm super excited.

PRE-NOTE: I totally failed the blog challenge. I will still continue where I left off. I believe I'm on day 15.


* * * *
My closest friends and family know how much I adore my little brother. If you didn't know, well, now you know! He said something hurtful on FaceBook about me, in his status update, and I'm just bummed about it. He knows I read it so I'm sure he posted it to intentionally hurt me. Whatever the case is, I sat here crying for a good hour. Even as I write this, I'm tearing up.

I see him going down the wrong path. Possibly temporary path. Hopefully! I know I've walked it before and can't say that I regret doing so. I just wish he would spare himself the drama. Anyway... great quote about Courageous Parenting:


Imagine for a moment that your daughter was sitting on the railroad tracks and you heard the train whistle blowing. Would you warn her to get off the tracks? Or would you hesitate, worried that she might think you were being overprotective? If she ignored your warning, would you quickly move her to a safe place? Of course you would! Your love for your daughter would override all other considerations. You would value her life more than her temporary goodwill.

I'm not a parent but I am a protective older sister. 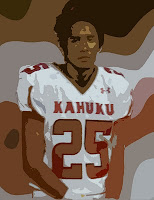 Today, as I was making my way to town to run some errands. Husband and I was passing Hauula Homestead Road and I see my brother sitting behind a truck (when he should be at school) with a bunch of other teens. So I called my popps to let him know what I had seen. Popps confronts him after dinner this evening, takes away his phone, and gives him the low-down on how he got his information. I don't mind being the source. I want him to know that he is ALWAYS being looked after.

This boy is my life. My heart is extremely tender for him. The circumstances surrounding his arrival into our family would only make one melt with compassion and unconditional love. I feel that for him. Since the day I laid eyes on him, I have enjoyed catering to his every need and want. Maybe I made a mistake in dedicating so much time and energy into giving him everything he desired. Maybe that's why it hurts me when he says idiotic things on his Facebook status. Maybe I'm over reacting. Maybe not.

His status was simple... "my own sister rats me out... not surprised."

Email ThisBlogThis!Share to TwitterShare to FacebookShare to Pinterest
Labels: face.book

There are several different ways of approaching the definition of money. According to Sirota in Essentials of Real Estate Finance, “Money allows us to convert our physical and mental efforts into a convenient method of exchange.” (Sirota, 2009) G. Edward Griffin (2002) takes the definition of money a step further. He states the following, “Money is anything which is accepted as a medium of exchange.” (p. 138)

Money has taken on several different formats throughout history. A system of bartering has always been present in every culture on the face of the planet. Another type of money is termed commodity money. This tends to be things that are commonly accepted for bartering more than others. Typically, this would be livestock or fresh produce. These types of things are termed “true money” because it is a medium of exchange and the items have “intrinsic value.” Eventually, societies became more sophisticated and began shaping precious metals into coins. Coins were considered superior to livestock and produce, even though those items had great value still, because coins could travel and not perish and were relatively convenient to use. Gold has stood the test of time as the most widely accepted precious metal in the world. After the fall of Rome, new civilizations created a system of receipt money. When merchants became too heavily laden with coinage, they entrusted their coins to the goldsmiths for safekeeping. Merchants would deposit their coins with the goldsmith for a fee; in exchange the goldsmith would issue a receipt with the amount of coins that were available, on demand, at any time to the bearer of the receipt. The paper represented the coinage that was on deposit with the goldsmith. The paper itself had no intrinsic value but it did, however, represent the coins and were thus one in the same. (Griffin, 2002)

I have in my possession a dollar bill that was issued in 1957. I also have a dollar bill that was issued in 2006. The largest difference in the two bills is that the 1957 bill clearly states on the bottom of its face the following, “One Dollar In Silver Payable to the Bearer on Demand.” At the top of the 1957 bill it reads, “Silver Certificate,” while the 2006 bill reads, “Federal Reserve Note”. According to Griffin in The Creature from Jekyll Island, “payable to the bearer on demand” was removed from the nations currency in 1964. (Griffin, 2002) Essentially, I interpret this to mean that I can no longer redeem paper currency for a precious metal of similar value. If that is the case then what, exactly, backs the United State currency?