REALITY TV: MALE CELEBRITY
Biggest Loser contestant, RUBEN STUDDARD, is my favorite male celebrity for November 2013. Called "The Velvet Teddy Bear" because of his beautiful voice coupled with his size... he is ALL THAT and then some. I remember when he was on American Idol, I was just thoroughly ENAMORED. The way he sang, the way the producers and directors portrayed him to be -- a romantic, soul-singing, lady's man! **sigh&swoon** I was sad when he got married and sadder when he got divorced just because divorce is hard. Now he's single and I'm married. The stars are not aligning for us to be together.

KIDDING... maybe in another universe we are happily married.


REALITY TV: FEMALE CELEBRITY
Project Runway contestant, KORTO MOMOLU, has got to be one of my most favorite designers ever on Project Runway. I am a fan of how she uses color and her designs. Her personality is also very zen-like and drama-free. I have to say that Season 12 winner, DOM STREATER, is another fave. Personality, style, usage of color and prints -- FABULOUS!!


WORST COME-BACK: ARSENIO HALL
He didn't change a thing for his show and it's kind of annoying. Oprah featured him on her show Next Chapter and he said that he left the first show to take care of his son. Ok... these are hard economic times in America and all us viewers have not been afforded that luxury. It's great that he took time off for all the right reasons but leaves a bad taste in my mouth that so many people are out of work and losing their homes, out of resources and getting laid off. Him coming back to the late night world is annoying especially since the jokes are the same, the format for the show is the same, even the set looks the same.

The husband and I celebrate ten years of matrimony. In a world where heterosexual couples are mostly forgoing marriage for co-habitation, I am glad that he and I are still together. He truly is my best friend now and we are partners in making our lives the most successful, the most passionate, the most meaningful that it can be. What more can one ask for than to TRULY LIVE to find joy and be happy?

In honor of the life that my husband and I have, I looked through old pictures of us. It seems like just yesterday we met and fell in love. The movie Diary of a Mad Black Woman reminds me of our love story. Me, getting out of a marriage that wasn't working only to fall immediately, head-over-heels in love with my husband. So I'm Helen, played by Kimberly Elise. The ex-husband is Charles, played by Steve Harris. My hubby now is Orlando, played by Shemar Moore. Seriously, my husband just swooped right in and delivered EVERYTHING I desired in a man and partner. It wasn't all good. We did have our fights and some serious hard times but we're still here and we're both in it for the long haul. Who knows what tomorrow will bring for us? No one knows. I will live in each and every moment and be grateful for his presence in my life. 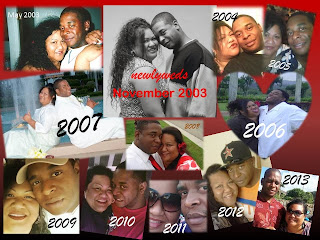 He and I have the most extraordinary discussions about life and relationships and politics, religion, philosophy, and on and on and on. A lot of times we fall on opposite ends of the spectrum but it works for us.

Happy Anniversary to the love of my life.

This is a letter I sent to the Land Use Commission. They are meeting tomorrow to discuss Turtle Bay's bid to turn the North Shore into another Waikiki.

The italicized part is a form letter form the Defend O'ahu Coalition. You can visit the site and send the same form letter and add some of your own concerns.

Aloha Members of the Land Use Commission,

I wish I could be there in person to make this presentation but I am unable to get off work. I have lived in Hau'ula nearly all my life. I attended Hau'ula Elementary from pre-school through the 6th grade and I graduated from Kahuku High & Intermediate. I have no plans on moving out of this beautiful area of O'ahu.

I have watched this fight between outside investors and the local community for far too long. This NEW investor/land developer to our community has no interest in the people that live here. This is probably the ugliest thing about capitalism and free enterprise. I would ask that you, the Land Use Commission, stand up for the citizens who do not have the money and time to lobby the government to do its bidding. It makes me sad that people want to turn such a beautiful portion of our island to an urban jungle similar to Waikiki. I love Waikiki because I have such a beautiful country to come home to - Hau'ula.

Mayor Caldwell supports all the businesses, including Hawaii Reserves Inc and BYU-Hawaii, in their efforts to urbanize this beautiful part of the island. I ask you to put a stop to this. We have the pleasure of having a year round growing season. We should be preserving the Ag land for the purpose of raising agriculture. Why are we shipping in food when we can feed the people right here, using the lands that are marked for agriculture. There are so many towers coming up in the Kakaako area and new homes in Kapolei, why are we going to do the same to the North Shore?

I also write to request that the Land Use Commission issue an order to show cause to the developer at Turtle Bay Resort and return the 236 acres of resort property classified to Urban District in 1986 to its original classification due to decades of inaction by the developer. The developer has failed to comply with representations, conditions and commitments made to the LUC, and therefore the property should revert back to the Agricultural District until and unless the developer comes forward with a new boundary reclassification petition for its newly proposed use.

As you know, Turtle Bay Resort developers originally presented their timeline in 1986 and promised the state and our community that they would be finished with the project by 1996.  This never happened.  Numerous developers have since failed to comply with representations and instead perpetuated a tradition of land speculation on the rural property.

Since the filing of Defend Oahu Coalition's original motion in 2008, the Hawaii Supreme Court ruled that the developer at Turtle Bay Resort be required to prepare a Supplemental Environmental Impact Statement (SEIS) due to a change in conditions since the original development proposal.  The Court's ruling supports reversion of this parcel.

According to their new SEIS submitted in August 2013, the most recent developer has indicated that it now intends to proceed with a project that is completely different from that which was proposed to and approved by the LUC in 1986.

Please issue an order to show cause and move this process on to the next step.  Residents of the North Shore and Ko'olauloa deserve a chance to give testimony on a project that could severely impact their quality of life.

Thank you for your time and consideration-
on November 07, 2013 1 comment: