Patti Austin is one of my most favorite singers of all time. She sings a song called, "If This is the Last Time." The lyrics of the song, the beautiful melody and arrangement, her soulful voice contribute to an exquisite song.

When my ex-husband and I were separating after four years of marriage, Patti's beautiful song got me through the tragedy of separation. It could have only led to divorce because of the amount of heartbreak that I felt. I am going through my old writings and am experiencing the heart ache all over again... like it's happening right now. I am so amazed that my journals can move me like this. I'm sitting in front of this computer, listening to Patti on repeat as I read through the old memories. It could never be said of me that I did not love that man. Even now, after all the pain, I can still recall so many wonderful experiences.

There's nothing, absolutely nothing, like falling in love for the first time. He was the one that I loved without inhibition. There's only one love like that. And even though I am in a very committed relationship, ten years strong, I still recall the magic of first love along with the broken heart. The pain of that first love surely makes me who I am today. That terrible heart ache broke me down but I now know the limits of my heart.

I smirk at my writing from 13 years ago and the extreme romanticism of believing that love had no limits. It could have been my young, tender age that made me such a hopeless romantic. Strewn across so many of the pages of my journals are professions of my love for my ex-husband.
"I will love you forever"
"I will always love you."
"You will always be the only one for me."
"Long as I live... you will always be... my first love."
"Only ONE man for me."
"He owns my heart."
All these professions indicate my naivete in matters of the heart at that time. I'm no guru now but I surely do know that there are just some things that I will absolutely NOT put up with. God Bless my parents and family for standing ever so patiently as I made my way through all that hard stuff. Though they tried to prevent me from having to go through it, all they could really do is sit back and let me experience life. My heart aches even now when I think of how much love I felt for that man. He was perfection to me and yet so very flawed and dysfunctional. I was lost in a crazy cycle of highs and lows.

And in all the craziness that comes with unrequited love, the best thing that emerged from that broken relationship is a stronger me:
A me that emerged, like a butterfly, from a cocoon of doubt.
A me that needed to be broken down only to realize that I was valuable even if he didn't want me.
A me that knew that him being a broken man didn't mean that I was a broken woman.
A me that still believed in love and that someone could love me with the same intensity that I offered.

Here I am. Here I stand as a testament that I can do hard shit. Excuse the language but there's just no other way to describe it. I.CAN.DO.HARD.SHIT. 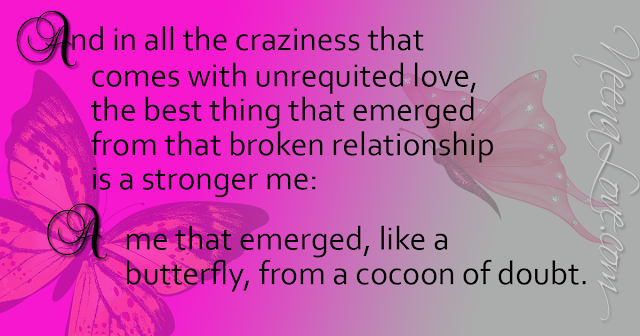 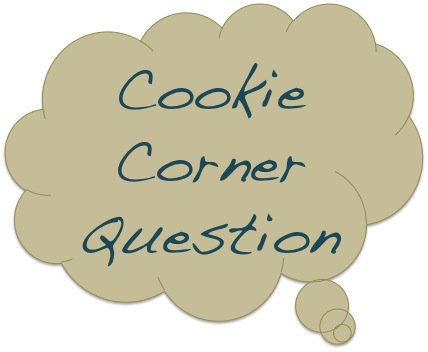 THE QUESTION: If you were over paid by your employer, would you tell? Inquiring minds want to know.


There was an extra $500 dollars on my most recent paycheck. At first, I thought that maybe the mistake was a banking error. I logged on to the company website and downloaded my pay stub. It was VERY clear that I had been over paid. My company paid me like this:
96 hours of straight pay
11 hours of sick leave
8 hours of vacation
=115 hours of pay

Don't get me wrong. I love the extra cash. It always feels great to get more money than expected. During my hour-long commute to work, I contemplated whether or not I should alert someone about this obvious oversight. The yin and yang conversation happening in my brain went something like this...
YIN: You earned that money. You always stay extra and aren't on the clock. You do a lot of things above and beyond the call of duty.
YANG: You are rationalizing dishonest behavior.

YIN: It wasn't my mistake. I didn't over pay myself.
YANG: You are rationalizing dishonest behavior.

YIN: No one is going to find out. And if they do find out, I didn't over pay myself.
YANG: You are rationalizing dishonest behavior.

YIN: If I'm over paid then there has to be others that are over paid. Let them report it to the company.
YANG: You are rationalizing dishonest behavior.

What I ended up doing is calling Financial Services. I wanted to talk to the person in charge of payroll. She's on maternity leave so I spoke to the person that was tasked with the job. He confirmed that what was in my bank account was not a banking error and that the company did pay me what was in my account. Next thing I did was text my favorite person in HR. Anyway, he was blown away and told me -- CHRISTMAS BONUS.... he was kidding. He told that whatever I am paid is from the hours that are uploaded by IT. I know that is just so crazy. There are tons of employees and I'm sure they can't manually check everyone. But maybe they should since I was over paid by 35 hours. Imagine that across the entire organization.

I know this seems like so much trouble to go through considering that this discrepancy was actually in my favor. Nothing was resolved on Friday and they're going to look into it on Monday. They will probably offset my next check to pay back for whatever was over paid to me. I really don't care if they do or if they don't.

The people I polled who were saying that I shouldn't tell my employer are probably wondering, "WHY?"
"Why, you fool?"
"Why would you tell someone that they gave you too much money?"
"Keep the money you bloody fool."
And I have my reasons. I most certainly do.

1. I did not earn that money. I did not work for all of those hours.
2. Based on reason #1, my character is in question if I didn't report the oversight. Honesty really is the best policy. A clear conscience is priceless.
3. It's the right thing to do.

I just completed the audiobook of Fifty Shades of Grey. I have to say that I didn't care too much for all the sex in the book and the BDSM actions. It was overkill. I did, however, enjoy the characters of Anastasia Steele and Christian Grey. None of the trailers or movies shorts on YouTube even come close to how I imagined the two characters. Anyway, **spoiler alert** throughout the book I was supremely irritated by Ana's naivete and Christian's mysteriousness. By the end of the book, though, I was rooting for both of them and hurting at the same time. I was so broken up. Ana's fall for Christian was so genuine. It reminded me of how I fell head over heels in love with my ex-husband, which of course led to our eventual break-up. By the end of Fifty Shades of Grey I was shedding tears over these fictitious characters and remembering the difficulty of falling in and out of love and dealing with the hard stuff of learning to trust someone else.

As soon as I arrived home from work, I dug out my journals from the years when my ex-husband and I were separated. I started reading and began crying as I read. I remember the feeling of not being needed by the man who I had given my heart to, with complete and utter abandon. Without going into a long and detailed explanation of our twisted relationship, the short story is that we separated after four years of marriage. He left me.You can dig in my blog archives for stuff that I've written about our ill-fated romance.

I just wish my husband were here to make it all go away. But he's the other part of my emptiness. I still feel like I'm chasing him.

So what becomes of a faithful woman whose ONLY hunger is passionate, unconditional love? I tell him that I'll be here, waiting for him. But my life is just passing me by. When does it come back to me? I used to think that love could flourish with one person doing all the loving but it can't. To do that would be AGAINST the laws of nature. I need him to love me back the way I NEED to be loved and not the way he knows how.

This year has been quite a struggle. I cry 2-3 times a week over this crazy love. And it doesn't affect him. Nothing I desire sways him EVER in my direction. Shane(fake name) wants what he wants when he wants it. I can't change that. I can't change him. I don't know if I mourn this strange love affair or... if I'm letting him go. I'm uncomfortable with both options.

I just want to feel special. He doesn't make me feel special like it was when we first met. But even then, Shane had his walls up. I love him so much. I miss him like crazy. But I want it all. Don't I deserve it all?
*****

Break-ups are so hard. Going through my journal brings up all kinds of feelings. I have so much compassion on the person I used to be and who I am today is because I was that woman that suffered from unrequited love.

My husband and I need to have a talk. I feel less than appreciated. I think he has stopped loving me. I'm a different woman than the one he left one year, one month, nine days, and three hours ago. I don't want half-a-commitment. I don't want to have to worry about him EVER leaving me...again. I don't want another birthday to pass unnoticed. I don't want to spend another Christmas apart. I don't EVER want to be alone on our wedding anniversary again. EVER!

What am I gonna do? There is an answer SOMEWHERE!!! Every time he needs a break from me, is he going to leave me? Is EVERYTHING ALWAYS my fault? I don't think he knows how much love I have for him. If he did, would he STILL treat me this way? And why do I have all this love for him when he gives me no reason. How do I know he loves me back?

Why do I continue to hold on when there is nothing in return?

He's supposed to be my best friend and some of these crucial feelings I'm afraid to share with him. Actually most of them. I try really hard to NOT feel sorry for myself and I do a pretty good job. But I'm tired of nagging myself to demand the love I need and deserve.

So many times throughout the day I see something that INSTANTLY reminds me of my husband. Could be the way someone smokes a cigarette. Could be a bald head. Or the way someone walks... and I think about him.
*****
on July 17, 2014 2 comments: