They Met on Blackplanet

Oh my goodness... they met on Blackplanet. A couple of years ago this guy meets a woman on Blackplanet. Guy is married. Woman doesn't know at first but eventually finds out about his true marital status. Guy's wife ends up beaten in her bed and dies a year and a half later without any recollection of the events. So the guy is on trial for attempted murder. His former mistress shows up to testify in the case.

This kind of story doesn't usually interest me except that.... well... THEY MET ON BLACKPLANET. Before I started a blog, I was a regular on Blackplanet. It was my way of blogging. I'd change up my page daily to reflect my thoughts. I was in an unfulfilled marriage (the first one), separated from the 1st husband, and totally desperate to be relevant.... at least relevant to HIM. So I expressed myself on my BlackPlanet page with the username NEENALOVE. That is still my "call name" now (come find me on Words With Friends).

I was a regular in many of the chatrooms and made tons of friends from across the United States both male and female. I also had a few flings... wanna read about one of 'em CLICK HERE!! I have met some downright dirty men from Blackplanet and a few precious gems.

One horror story: dude wants to take me to lunch. We have never met except for our passing notes back and forth on the net and the eventual exchange of our phone numbers. When we finally do meet up he looks NOTHING like his photo. Serious! I was super disappointed. On top of that he was really touchy-feely. A few conversations on the phone did not give him the right to be so touchy-feely! Eeeeew. On top of that, he was not as attractive as his photo was. **sigh** We ended up at Ward Center where I opted for McDonalds. I just couldn't do an entire hour with him. We never spoke again except for a few notes on Blackplanet. The horror story part happens when he shows up at a barbecue with one of my best friends. What are the odds? In any case, he pretended like he didn't know me which upset her to no ends because she felt like he was trying to hide something. That was that.

Blackplanet was like MySpace. You could fix up your page using simple html. Embed photos and videos and all kinds of fun stuff. I shut down my page when husband and I married. No matter how much I try to say that I treated BP like a blog, it was nothing more than a site to pick-up guys for me so it had to go once I committed to my husband.

Anyway -- the news story about the attempted murder brought back so many memories. It seems like a lifetime ago. I just remember the excitement of meeting new people. The romance! The wining and dining.
on June 16, 2011 No comments:

I don't know where all the time went.

I sent my little brother off to the mainland today. He's just going for a short visit but I am amazed that he's 17-years old, will be 18 in September.

I have such a soft spot in my heart for him. I acknowledge that I spoil him rotten. Ugghhh.... and he knows it too. He is on the precipice of man hood.

I used to love taking him with me wherever I went. When Disney's "The Lion King" came out in theatres, I took him to see it when he couldn't have been more than 2-years old.

I wish him well on life's journey. I pray that he makes good choices... that he does good things and puts goodness into the world. I pray that his trials in this life will be small... but significant enough to push the boundaries of his mind. I wish for him all the abundance and goodness in the universe... that it may rest upon him softly and that he will accept it, wholeheartedly. 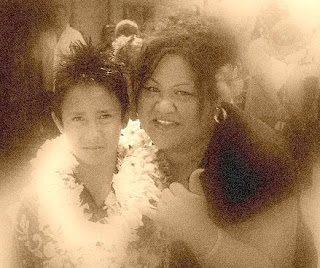 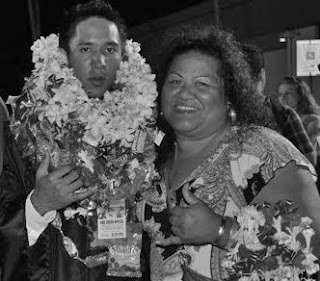 He is obviously NOT a smiler. LOL