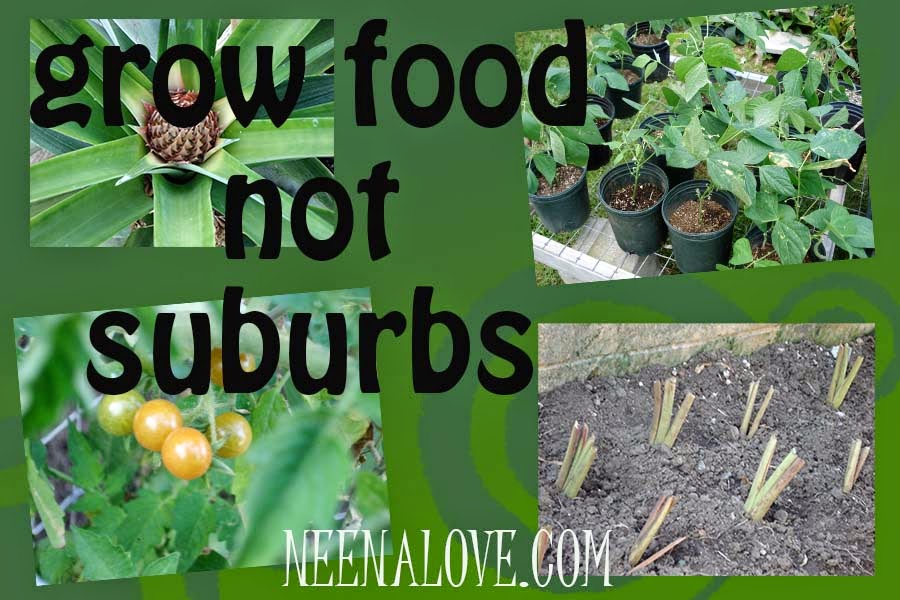 Please send in your concerns about the development of Ko'olau Loa. No matter where you live on O'ahu, please send in testimony.

You are welcome to cut and paste my testimony and send it as your own. NO TO BILL 47!!

I am writing all of you to share my thoughts on Bill 47. I have copied in the representative and senator for my voting district so they are also aware of my concerns in relation to Bill 47. I have submitted testimony to the Ko'olauloa Board and to the City Council in previous hearings. My position has NOT changed. I am in opposition of adopting the revised Koolau Loa Sustainable Communities Plan.

There is nothing sustainable about the revised plan. With large projects already in the works in Honolulu, central and west O'ahu as planned by the Oahu General Plan, I find it very difficult to understand why there would be a need to revise the Koolau Loa Sustainable Communities Plan to include even more housing.

The argument of the HRI, BYUH, and PCC is that they need work force housing. All the work force housing they could want will be available at the Koa Ridge and the Ho'opili developments as well as all the Kakaako developments. Many people commute to work from Ko'olau Loa into town. The same could be done in reverse. I am upset that HRI, BYUH, and PCC are arguing to develop such a beautiful part of our island. They say they are the largest employers in our area but barely pay above minimum wage and have no cost of living adjustment built in to the wages. This is why many people commute to town.

The high demand for housing also comes with a high demand for food. All of our ag zoned land in Koolau Loa should remain ag. We must promote farming and true sustainability so that we are not dependent on ships from America to bring us food.

The traffic issue has not been addressed. Kamehameha Highway from Haleiwa to Kahalu'u is a parking lot because nothing has been done to alleviate the traffic. Tour buses and tourists along with residents of the area jam the highways making it unpleasant to drive or travel along Kamehameha Highway and Envision Laie wants to build more houses. 1,000 more homes in Ko'olau Loa will come with a conservative two cars per home making our roadways clogged with 2,000 more cars.  That is a conservative estimate considering our multi-family living style in Hawai'i. If we conservatively estimate 6 people per household, that's 6,000 more people clogging the beaches, over fishing, and disrupting all the natural beauty in our area. A thousand more homes will drastically change the landscape and coastline, negatively. In the short run, one generation gets to enjoy brand new homes. In the long run, we are selling the health of our environment and our ability to teach the next generation of native Hawaiians about the food that comes from the earth and the ocean.

In 2013, I wrote a letter to Kirk Caldwell expressing my opinion on Envision Laie. What upset my about his reply is the he sides with HRI's bid to develop. His exact words, "No other entity, in recent years, has come forward in proposing affordable, workforce housing for the communities of La'ie and Kahuku, on a scale large enough to really make a difference in addressing the demand." Does this mean that anybody could come in and bull doze the land to fit their needs if they pay high enough? The letter states that there is overwhelming support for affordable housing but as I stated in the first section, what kind of affordable housing is going to be provided? More than likely it will not be a public housing development. Instead we will have homes upwards of 600k.

The public housing issue should also be brought up. I don't necessarily like the idea of public housing projects in Ko'olauloa but the City shouldn't rely on a private entity to do something about affordable housing. If I pay taxes the same as everyone else on the island then I should be afforded the same services as in other communities. There are income-based homes all over the island. Does the City feel that it does not need to service our area of the island because its HRI/BYUH/PCC responsibility to do so? We are basically being ignored by Kirk Caldwell because HRI is willing to do it. That is hog wash! If Adolph Hitler were alive and he wanted to develop a camp here in Ko'olauloa we should just allow him to do so? All of this just boggles my mind that Caldwell would put in writing that HRI came up with a plan and so he supports it.

There is a divide in this community and I will continue to be very vocal about how I feel about this proposed development. What one generation benefits from may be the undoing for the generations that follow. Ponder that because I honestly think that the story that Envision Laie is selling to its followers is not exactly the one they are planning behind closed doors. I have mentioned a couple times that I follow the money trail. Who stands to profit the most? Profit is the motivation. Anything else they sell to the public is fool's gold.

Now that I have discussed some of the reasons why I do not support it, here are a number of solutions I am proposing.

1. HOUSING: I remember in the early 80's, the Kahuku housing development was part of a USDA program. I would support a small number of homes if directed by the USDA. However, I do not support a private developer because of the obvious gentrification it will cause.

2. SUSTAINABILITY: We need to promote ag and inspire the new generation to want to raise food. What happens when we have completely paved over paradise? We will rely on food from outside sources as we do now when we have all the natural resources at our finger tips. On-island food production should match the number of people on the island. It defies logic and only takes into consideration the people wanting housing now. What do we do when inventory runs out?

If you don't have the words - you are welcome to cut and paste mine. I detest the Mayor's Office of the City & County of Honolulu.

I absolutely DO NOT support an increase in the general excise tax to fund a terribly planned rail project.

Residents of the North Shore do not benefit from the Rail and the Mayor is asking for us to continue to help pay for it. We have our own traffic issues to deal with. Per the Mayor, he said that the North Shore traffic problem is not his to deal with but the State's job. If that is his approach then North Shore residents should not be compelled (forced) to pay toward the excise tax that funds the rail.

I would prefer that we tear down the rail and close that project. The citizens keep throwing money at this project and the money just disappears. The project is way over budget already. Where is the accountability? The Rail project has been given EVERY opportunity to succeed and has done nothing with it.

I also do not agree with a rise in property taxes as the Mayor suggests will happen if the excise tax is not approved.

This project should not have moved forward to begin with. It is poorly planned and not at all fiscally responsible. If I were this much overdrawn at a bank, the Feds would have jailed me already and asked for restitution. Please apply the same logic to the Mayor's office and make them accountable. 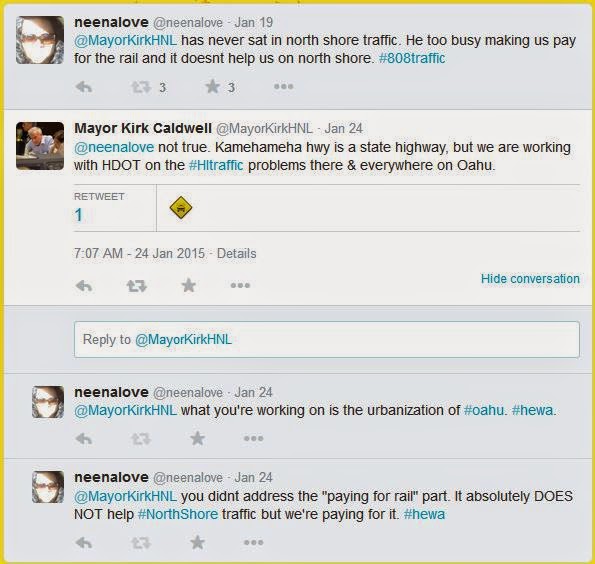 This is Official Correspondence I submitted in relation to GM514, Governor Ige's nomination of Carleton Ching to Chair DLNR.

Please. Please. If you have time, please send an email to WTLTestimony@capitol.hawaii.gov
and OPPOSE this ridiculous nomination. If you need more information to research, visit the following sites and articles:

You can cut and paste my testimony if you'd like.


Chair, Vice Chair, and the Committee on Water and Land:

I am writing to emphatically oppose the nomination of CARLETON CHING to chair the Department of Land and Natural Resources. I think Governor Ige is ill-advised at his nomination of Carleton Ching. It is the responsibility of this Committee to protect the interests of its citizens but more importantly the Water and Land that we all share in the public domain.
Based on Mr. Ching's affiliation, association, and position with the Land Use Research Foundation, it is clear that he will exercise the wrong type of "control over public lands, water resources, ocean waters...etc." A simple google search of Land Use Research Foundation gives you a clear and accurate picture of the tenets to which Mr. Ching currently honors. Putting Ching into the Chair for DLNR promotes further development. If he has worked to develop, develop, develop all these years, how will he be able to objectively look at ways at protecting Hawai'i's natural resources?

I am very disappointed that Governor Ige would nominate a person whose current position is to do the exact opposite of what the DLNR represents. Is he unaware of easy google searches where he can look people up and find out their background? Maybe Governor Ige is honoring commitments to people that supported his campaign because I see no logic in his nomination of Mr. Ching. From the idiotic implementation of The Rail by Mayor Caldwell to this ridiculous nomination, it is very apparent that the City & State are only supporting corporate interest. I cannot understand why or how this island can be sustainable if we continue to pave over agricultural land.

I visited the Land Use Research Foundation of Hawaii (LURF) website. "LURF promotes the business interests of landowners and developers in Hawaii at the local, state, and federal levels of government. LURF seeks passage of legislation and policies that create a favorable business climate in which landowners, developers, and the business community can grow and improve the quality of life for the citizens of Hawaii." I take offense that lobbyist groups like LURF think they know whats best for me and mine. LURF clearly states that they are most concerned with the business interests of developers.

I think it is your committee's heavy responsibility to protect our land and promote sustainability. I do not believe, for one minute, that Mr. Ching will be able to separate his position with LURF from a possible position at DLNR. Please do the right thing by rejecting Governor Ige's nomination.