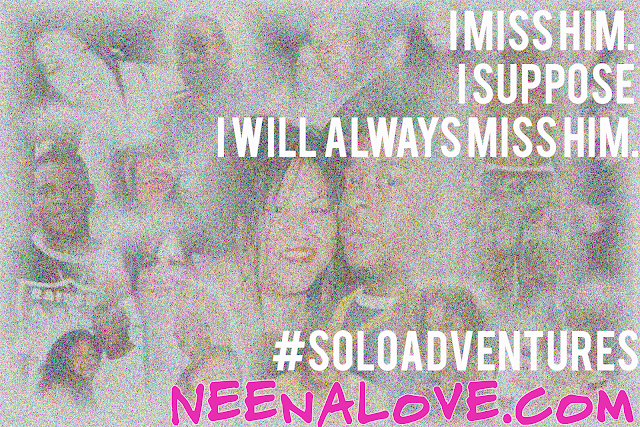 I have about a month and a half left until my last day of work at my current job. When I leave this university, I will get on a plane and make my way to South Carolina - the state I have chosen to live in for the next couple of months, at least. I know it seems so random that I have selected South Carolina to make my home. I have visited the state twice this year and I feel compelled to go.

When my ex and I split, I know that we were both unhappy. However, I am stubborn as a mule. I was committed to my commitment to him. Loyal to a fault. In recent months, he and I have been texting back and forth. He is trying to explain to me why he left me. I don't really want to hear his excuses. I needed explanations when he left me not now, nearly a year later. I have already readjusted my life to being single. I can't say that I don't miss him but I am moving forward and I cannot look back. What is odd is that he blames me for the break up of our marriage and that is not my experience with how things went down between us. My inability to compromise on certain issues, namely relocation, is why he left me. I am sure he is perturbed that right after we break up, I decide to leave Hawai'i.

HIM: I think you wanted it too. (Divorce) I was setting you free. Us free. I didn't lose any attraction for you etc. Just going different paths. There was never anybody else. I know I was holding you back.

ME: We didn't have to hold each other back. We could have worked together to bang out every dream.

HIM: You didn't want to leave. I know deep down you don't.

ME: If I could take it all back, I would have gone wherever you wanted to go.

HIM: Yea, you were so adamant about not wanting to leave.

HIM: It's fine. I was hurt about it for a long time. It was like all your people looked at me like I was the bad guy. No one called to see how I was doing. I was like wow.

ME: You shred my heart. What are they supposed to do?

I have to insert my opinion here. I am still so irritated that he was upset about my family not contacting him when we were getting divorced. When we split, I called his mother and father to thank them for all the years of support and all the years of love. He didn't call my father to even try to explain why he was leaving me and my father didn't need an explanation. He understands that this was his choice. My father said that my ex and I are both capable of making sound decisions. I am so similar to my father in his thought process. I cried my eyes out when I said my goodbyes to my in-laws. They were such a big part of my life. I loved both of my sister-in-laws. I loved my sister-in-law's kids and I know they loved me too. Break-ups are so difficult especially when it's not mutual. I feel very close to them in a way that I wasn't with my first husband's family. I miss them as much as I miss my now ex-husband.

HIM: Two sides but its OK. During a break up the guys is always the bad guy.

ME: I kept asking (friend) to check on you. I still have so much love for you. Wish things could be different.

HIM: Thank you its all good. LOL. I can handle myself.

ME: Well you gave up on us. That is the disappointment. Instead of work together to fix it, you left me.

HIM: You gave up. When you got mad every time I talked about moving. Like walking on egg shells when I brought it up.

ME: I did not give up. Me talking about business ventures... was like walking on egg shells.

Apparently, we just did not see eye to eye. What hurts me every time I go back and read these texts is that he didn't want to try and work it out. He just wanted to leave and break up. That is so hard for me to swallow, even now. Even though I know how smart and talented I am, him leaving me is such a blow to my self esteem. He is the second man to leave me and it still hurts like hell. I see him as such a beautiful man. I can't lie - his body is so beautiful and he is so drop dead gorgeous - in my opinion. And he has such a beautiful soul. When things were good between us, they were really good. He was my best friend. We did everything together.

HIM: You were more loyal to your family than me.

ME: I see that. I apologize. And now it's too late cuz we're divorced.

HIM: Just paper. Its all good now.

ME: I can't talk about this. Crying. Still so raw.

HIM: We both hurt.

ME: So why did you walk away instead of work it out? Try a separation.

HIM: I knew it was going to be forced.

ME: Nobody's forcing me now.

HIM: I see. Going to South Carolina?

ME: You was just done with me when I realized that moving was what you wanted. I also thought there was someone else because of your extra activities.

ME: You right though. My family did get in the way of us. Sorry. That realization prompted this move. I have to build a life separate from my fam. Even if it will be by myself.

HIM: You choose your family over me. That was cruel.

ME: I'm a good woman and you rather be alone than with me - that's a blow to my self esteem. But its all good. I will bounce back.

ME: Wish you would have said all this stuff before you dumped me.

The conversation goes on and on. The way I feel right now, I would go back to him in a heart beat. That is my honest and true feelings. And it's not because I think we had a perfect relationship or that we are made for each other. No. What I loved about he and I is that we were best friends. We did every thing together. He always made me feel safe. He made me feel like I was the only woman in the world. We spent so much time together and were not sick of each other at all. He took really good care of us and I will forever be jealous of whoever he chooses to spend the rest of his days with.

So here I am, making this move to South Carolina without my man/best friend. And this is what he wanted - to move - and I am doing it without him. If I could turn back the hands of time, I would gladly hear him out and allow honest expression to happen between us. I don't know why I was so uncompromising. I don't know why he gave up so easily. I don't know why we didn't have this discussion before he divorced me. And now we're having open and honest communication via text message. I wish I could take it back then this move that I am about to make would not be a #SoloAdventure but another positive move in our relationship. I miss him. I suppose I will always miss him.
on September 04, 2017