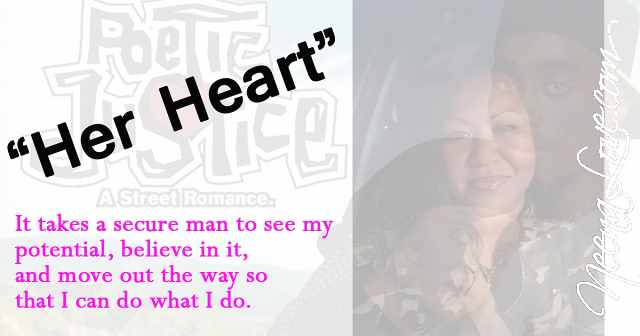 I spent my Saturday night curled up in bed, feeling ill, craving sleep but unable to shut my eyes. My mind is always on overdrive, overthinking decisions that need to be made, and turning over past choices that I have not made peace with yet. And of all the mindless things that I could do, I selected watching a movie on Hulu to help pass the time. I nixxed the writing for one evening and sat through an entire movie. It's rare for me to have attention enough to sit still and look at a movie without being distracted by social media or the call to write or read a good book. My selection that evening was John Singleton's, Poetic Justice starring Janet Jackson as the lead opposite the late Tupac Shakur. I am a huge John Singleton fan and am sad that he has not put out anything recently. He exploded on the scene in the early 90's with his debut film, Boyz N the Hood. It was, by far, the movie of my teenage life! Though I could never actually relate to the gang lifestyle of South Central L.A. it certainly was a gripping story and portrayal of what goes on in the inner cities of L.A.

Poetic Justice also touches on the issues that hamper young people's lives in L.A. but this is told from the perspective of a young female writer, Justice, played by Janet Jackson. Her escape from her reality is her poetry. I have only watched the movie once prior to this screening. Even though I have always identified with being a writer, the first time I watched it back in the mid-90's, I did not connect with the character of Justice. This time around was so different.

The movie is about love. It's about how this young urban woman deals with her personal issues and how it relates to her finding love. Justice is very skiddish about the idea of opening her heart. In the opening scene, she is at a drive-in theatre with her boyfriend who, based on their dialogue, just got out of lock-up. For young readers that are not familiar with a drive-in theatre, you take your own car into a parking lot where a huge screen is set up to project a film. The sound is either set to a certain radio station that you tune in to or you can park near a speaker that you are able to hear the movie. It is quite an intimate setting as movie-goers are able to carry on conversations or do what lovers do and are still able to maintain a small bit of privacy.

One of my most favorite dates of all time happened at the drive-in theatre. It was after my junior prom. My date and I doubled with my best friend and her date, which was also a good friend of my date. I look back at it with fondness because of the level of respect that was observed between all of us. There was no pressure for any hanky-panky physical activities. The four of us genuinely had a good time and the movie we watched was, White Men Can't Jump, starring Wesley Snipes.

Anyway, Justice's boyfriend is trying desperately to have physical relations with her. She nervously asks him why he loves her. Without skipping a beat he says, "Cause you fine!" She is thoroughly unimpressed by this answer and pushes him off. She distracts him by saying that she wants some popcorn and jujubees. He is reluctant to go but he is still trying to impress her. He exits the car, takes a few steps toward the snackbar then races back to the car. He tells her, "You want to know what I love about you? I loved that you sent me all those nice poems when I was locked up." She blushes. For a deep-feeling person like Justice, that was the right answer or at least a large step in the right direction.

I can certainly identify with Justice's search for a man that can see into her and not just her physical beauty. I know that has always been the most important thing to me - that a man could see my soul as it is and love that part of me the most. Physical beauty fades. I don't pretend to be the most gorgeous thing on the planet and most times I feel awkward or average even though admirers gush about my looks. For me, the best parts of me cannot be seen with human eyes. It can only be observed soul-to-soul. Anthony Hamilton sings a song, Her Heart. The lyrics are so beautiful to me and the melody adds a touch of sadness that can only come from a man with so much regret for hurting the only woman who loved him with such completeness.

And as you cried in my arms
You woke up my heart
And I saw again what I found in you
Cuz her love, her love
Won't let me lose her
No matter how I try
I just can't say goodbye and lose her

I point out this particular song and these lyrics because it shows the extent to which a man pushes his woman until he could really see into the heart and soul of her. It is almost as if he takes her to the verge of breaking her heart before he can actually see her true value. For me, this type of realization is crucial and yet may come a little too late.

Justice's boyfriend dies in the next scene right there in the drive-in, before her very eyes. You can see and feel her heart seize up and become as stone. The rest of the movie attempts to follow Justice along this path towards opening her heart again. Watching the movie with this as the sole objective of the story changes how I view this love story. Though I still cannot understand the merciless killing and loss of her boyfriend in that manner, I do know what it's like to lose someone that I loved so much. Whether it was my first husband or my second, I know what it is like to be cut off from the man that I love. And it hurts like hell. I can pretend that I'm moving on and going towards someone that will take care of my heart but am I really? I can make comparisons across the board with old love and new love and there really is no comparison if I am looking at it strictly from the standpoint of who can really see and appreciate my heart and soul in its totality!

Sure, new love is exciting and brand new. There is no history of hurt and the magic and the chemistry is intoxicating... yet there are so many flaws in it's expression. I may seem like an independent woman with all her ducks in a row but that is so shallow for someone to only be attracted to that part of me. What I want is someone who can see into the heart of me and know me. Someone that knows every trial I have faced, knows the emotional battles I've fought, the pain I have weathered, and still wants to be in my corner to hold me together. And if a man has no interest in seeing that part of me then why would I waste my time on it? Lust? The magic of those fluttering butterflies in my belly? Now that would be shallow of me and so surface and unlike me.

When Justice finally opens up to Lucky, played by Tupac Shakur, she exposes parts of her past that illustrates why she is so hardened by life's trials. Lucky has the choice of running from that type of emotional pressure. Some people are not meant to bare the load. Some people are not equipped with that type of emotional depth and stability to want to stay around. In the end, Lucky knows she's worth the risk of loving a woman so hardened by life. And that, that is what I want. That is what I deserve.

Like Justice, I cannot be so guarded about my heart. I cannot pretend to be this strong woman when all I feel is weakness inside and I have to let a man in so that he is able to provide that support that I am craving. I cannot say that I am open to new love and not give him a shot at being everything I need him to be. I have to open my heart space up and tell him what I need and let him in on what makes me tick. I have to expose my battle wounds and let him see the scar tissue that makes me who I am. What is priceless to me is when a man can support me with all my ambitions and get behind 100% of all of my dreams no matter how ridiculous they might sound to him. It takes a secure man to see my potential, believe in it, and move out the way so that I can do what I do. I cherish that. It's what I deserve and it's what I received this morning so unexpectedly. And the butterflies that were a mild flutter has suddenly blossomed into rapid, pulsating waves of affection.