Black Panther: A Brief Hawaiian History Lesson and Such 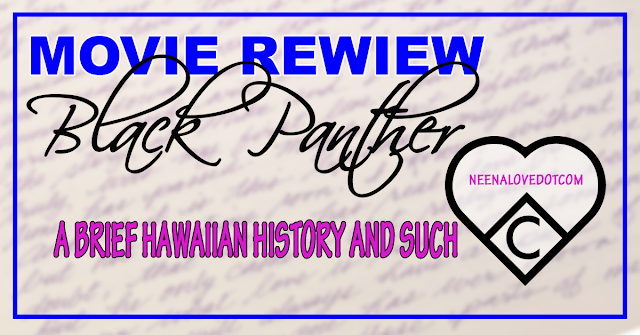 This is a movie review but not really. This is my reaction to Black Panther, the Marvel Comic movie that was just released in theaters. I'm sure you have read all the reviews by prominent journalists and you've watched all the trailers and all the interviews of the cast, the production crew, and the creative staff. But this right here is MY reaction to the movie as a Pacific Island woman.

I think the movie is fantastic whether or not the cast and crew was all-Black or not. I know this has been a source of pride for the African-American community. And they should feel proud and see the possibility in it. There are no limits but the ones that we place on ourselves. The true treasure and the beauty of good story-telling is that the story applies to all people, across all cultures, and socio-economic statuses. The entertainment value can be had across the board. I am not a huge Marvel Comic fan. I don't know all the stories of all the super heroes. I couldn't tell you that Black Panther marries Storm or any of that without someone else telling me. And I don't usually enjoy super-hero-comic-book movies. My ex can testify to the fact that I actually fall asleep in movies like this. However, what piqued my interest in this movie is the fact that the superhero character was not-White.

When I was a little girl, there wasn't anyone that looked like me on T.V. (There still aren't many that look like me but at least there's the Rock, Dwayne Johnson representing the Samoan community. My mother is Samoan and my father is Hawaiian.) I remember being so excited about seeing Tisha Campbell on Rags to Riches. Around the same time, The Cosby Show came on the scene, A Different World, and a slew of other shows that featured not-White people. I say this only to make the point that I was looking for representation in the media. I was looking for something that I could identify with, people that looked more like me, whose experience was similar to mine.

The victory of this movie is that it embeds in the rising generation of not-White people, especially African-Americans, a sense of pride and identity. I remember my ex-husband doing a DNA test from ancestryDOTcom. He being a Black man from Alabama, the difficulty of tracing his roots back to Africa through a paper trail was next to impossible. The DNA test was the best bet to figure out where, exactly, in Africa he is most likely from. The results came back with Cameroon and Benin. The elation he felt just knowing that he had a history outside of American culture was very exciting and I felt joy for his discovery. For me, I had many cultural practices handed down to me by both my mother and father. Rich traditions that I will carry with me until the day I die.

I was born in 1975 at a point in Hawaiian history where the mother-tongue was almost eliminated from the consciousness of Hawaiian people. Although English is the common language used in Hawai'i, it is NOT the language of the aboriginal people of Hawai'i, rather English is the language of the colonizer (United States). The late 70's and early 80's saw a renaissance of Hawaiian culture, the language was revived, navigation of the ocean was revived, cultural protocol and practices were revived, and pride in being a Hawaiian found new life. My father's generation was the first to assimilate into the American way of life. They were not taught the mother-tongue even though it was still spoken at home amongst the older folks. My father says that they were discouraged from learning it as they would need to learn English to be able to operate in America. He swells with pride when he sees his grandchildren speak the mother-tongue today as it reminds him of his childhood.

The Hawaiian monarchy and Queen Lili'uokalani (lee-lee-ooh-o-ka-lawn-ee) was overthrown by the children of American Christian missionaries in 1893 with the full support of the U.S. Navy. The prominence and wealth of the children of these American Christian missionaries was had on the backs of laborers imported from China, Japan, and the Philipines because the local population (Hawaiian people) were unwilling to work the sugar cane fields. During The American Civil War, the North would import sugar from Hawai'i to cut off economic support to the South. It was a perfect opportunity for those Christian missionaries to profit off the War. This is the reason there is a large population of Asians in Hawai'i and the intermarriage between all the different races has diluted the Hawaiian blood quantum severely. By 1900 Hawai'i was annexed as a territory of the United States and in 1959 (my father was a Senior in High School) Hawai'i became the 50th State.

In Black Panther we see a kingdom hidden from the world at the precipice of change. It's ability to shield itself from the outside world is probably the reason it was able to exist for millenia WITHOUT outside interference of their way of life. I point out the scene where T'Challa must release his panther powers and rightfully defend his claim to the throne. Their perfect utopic society is admirable steeped in protocol valued more for its tradition rather than necessity.

I love the way this movie brings forward the strength of the feminine. In Wakanda, the throne is defended by an all-female army. The most poised, loyal, and fierce female warriors are charged with guarding the royal family and protecting the borders of the land. We rarely see this type of archetype in American movies. Most women are portrayed in the media a certain way. It is refreshing that the writers and directors saw fit to give women a powerful presence.

On the flip side, what are the effects of the shifting gender roles? Recently, the U.S. military repealed regulations that barred women from serving in infantry positions. Women can now join an infantry unit and fight on the front lines in a conflict. Another comic-book-turned-movie, Wonder Woman, also portrayed female warriors.

We live in an age where the clearly defined roles once assigned based on the sex of a person are being obliterated. What does that mean? It means that there are no clear gender roles anymore. One cannot assume anything about anyone based on their "chosen" gender. For instance, in the past the role of a man in a marriage was to be the provider and the protector. We see that going away as women are now career-oriented and make up a large portion of the workforce. In many cases, Women/Wives are now the breadwinners and some men are now "house husbands."  And now same-sex couples can enter into marriage, there can be no assigned roles based on sex.

I cannot imagine what the world will look like in five or ten years when the clear gender lines have completely gone away. Generation X, my generation, ushered in this new era of blurred gender roles. We put the first women into the work force and our generation pushed women into College and University en mass. As women become educated and empowered, the gender lines have to go away. It is a natural cause and effect. Where will the millenials take this? Only time will tell.