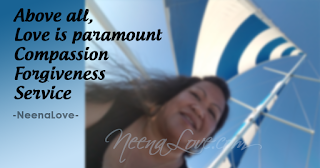 A dear friend of mine sent a song to me over the web. I don't know if it's because I had posted on Facebook that I visited my mom's grave that he decided to send me the song. For whatever reason he did, I am grateful for the message I received from hearing it. It has been on repeat all day. Well Done by Deitrick Haddon is the song. The lyrics are quite simple and the music is beautiful but the pleading in Deitrick's voice is so compelling. I embedded the video at the bottom of the post. Maybe you can let it play as you read this post.

These past few months have been difficult for me. The divorce from my husband of thirteen years really did a number on me. An unexpected event like this has really humbled me and brought me to my knees. I find myself so hungry for spiritual enlightenment; to feel the spirit of the Creator around me. I hunger for it above any search for love and companionship. I don't quite know how it all works but a few experiences in recent months have forced me to recognize God's tender mercies in my life and I am grateful.

Both my mother and father are staunch Christians. Though I was raised with such a strong foundation, I find that my curiosity for other spiritual practices is so much stronger than my Christian background. And yet, I have a soft spot for the teachings I was raised to believe. Above all, Love is paramount. Compassion. Forgiveness. Service.

The first couple of weeks after my ex said he wanted a divorce were extremely difficult. Extremely! I found myself crying myself to sleep all throughout the day and all through the night. Part of me was so upset and disappointed with my husband's decision to walk away from our relationship. I thought of how I would now be alone in the world and that I would grow old without a companion to journey through life with. I thought of my parents who were married to each other until my mother passed. That's forty-plus years of commitment. Coming up, I didn't know very many marriages that ended in divorce. My parent's generation was true ride-or-die relationships, so to see my second marriage come to an end just about tore me apart. My loyalty is so fierce and so powerful. Why wouldn't a man want that kind of woman in his corner? I know my value and I cannot understand why a man would trade me in.

In those first days, I leaned heavy upon my popps and my older brother for comfort. I am fiercely independent and rarely ever ask anyone for help. But the pain of this broken heart could not be soothed without help from above. My popps and my older brother laid their hands upon my head and put a blessing on me so strong and so powerful that I was sobbing.  I have never seen my father cry, in all of my 41 years, not even at my mother's funeral service. But that day, as he prayed over me, he choked up and I could hear him cry and felt his tears drop on me. We felt so strongly the spirit of my mother all around us. I felt her holding me up, and drying my tears, and telling me that everything would be fine. God's tender mercy was upon me that day because I rarely feel my mother's presence. That day, in those moments with my father and older brother, we felt her all around us and I knew that I would be just fine. I knew that I was not alone.

On a recent trip to "the South." I was driving on a lonely road. It was late at night and most of the roads in Georgia and South Carolina are not equipped with street lights. My drive from Atlanta through Georgia and South Carolina was a great time for me to clear my head. The long monotonous drive gave me plenty of time to be alone with my thoughts. My life since splitting from my ex-husband has been a roller coaster ride of ups and downs, of decisions and indecision, and full of so much change. I really needed that distance from all things familiar to think through the pressing issue of where I want to take my life.

My drive that evening should have happened much earlier than it had, meaning I should have been driving while it was still daylight. My arrival in Atlanta was four hours delayed. I should have made it to my destination by 7p but with the delay, it was now estimated to be 11p. As I made my way along the roads, I was just about 70 miles from the coast. That's where I wanted to be - the Coast. I wanted to look out on a different ocean than the beautiful Pacific. Perhaps, I could make a life along the banks of a new body of water; far away from the Pacific. I love the Pacific but I feel a wave of change surging inside of me and I am going to ride it to wherever it takes me.

The GPS had taken me along a very lonely road. I had not seen a car for miles. I felt like I was in an episode of Scooby Doo. Every town I had ventured through was dark and void of life. Spooky. Creepy. I felt like I had stepped back in time and I felt very alone, like the whole world had turned their back on me. I almost shed tears thinking I had made a big mistake for getting on the road all alone, in a place that was completely unfamiliar to me. I approached a fork in the road and went right instead of left. I had to back track, turn around and go back to the fork and take the left. I distinctly remember uttering out loud, "God, please watch over me. Please get me where I need to be safely." Inside, I was slightly terrified and feeling like I had made so many mistakes in my life and it was manifesting on this road trip. The delay with the airplane, the long and lonely drive through the darkness, taking the wrong road; these were all little events that were heavy on my mind as I made my way toward the coast.

Imagine pitch blackness, not a single street light, just the stars to light my way and the solitary light beams from my rental car. From the right side of my periphery, I see a deer shoot out into the lonely road. The animal was taller than my car and it's antlers were large and well-developed. The excitement of nearly reaching my destination had suddenly turned to panic as the large animal collided with my vehicle. It happened so quickly. As I think through the collision and slow it down in my mind, I am humbled and in awe of my experience and the tender mercy of God's hand in those moments.

Upon impact, all of the airbags in the vehicle deploy and there is a strong burning odor. I was so stunned and in a state of shock that I don't realize that I may have been in danger by remaining in the middle of the road or that possibly the burning odor could mean that the car was on fire. I was just in utter disbelief. I have heard horror stories of people getting knocked out and bruised by the airbags. Every single airbag had been spent. There was one at my feet, one that came out of the steering wheel and a curtain alongside the sides of the car and from the top of the windshield. I have also heard stories about the severe bruising that comes from the seat belt holding you in place. I had not lost consciousness but I was definitely dazed. 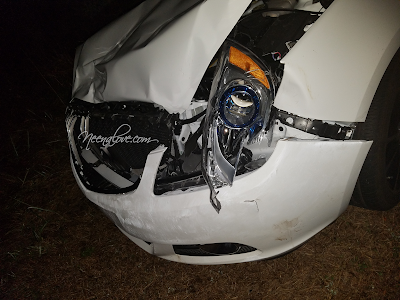 God's tender mercy was upon me because I did not have a single scratch on my body. I was not bruised. I did not suffer any whiplash. My back was fine. When Highway Patrol arrived, the Officer told me that the deer was back several yards away and was indeed dead. I felt a tinge of guilt for having taken the life of the deer without doing something useful with it's sacrifice, like maybe feeding a family. And yet, all I could feel was gratitude for being fully alive and not a single scratch on my body. I was definitely shaken up but feeling nothing but God's love upon me for watching over me so closely even when it seemed as if I did not deserve his/her watchful care.

Both events, feeling my mother around me in late September on up to the trip that found me on the side of a lonely road with a wrecked car in January, were eye-openers to how closely I am loved and cared about from on high. Even in my most sinful pursuits and dark behavior, my mother is reaching out to me from beyond the grave and God is watching me, ever caring for my safety and well-being. Thank you dear friend for sending me this song. It prompted this post. The song had me reflecting on God's hand in my life. I kneel in humility and am strengthened by the thought of seeing my mother again.

Wow. Beautifully written. There's something so honest about you that it kind of scares me. As if you area able to see through my facade. Thank you for sharing this, sis. Take care.