In the past, I have written about Envision Laie’s plan. Links that I posted in the original entry are no longer working. There is a link to Helber Hastert & Fee Planners, they worked with the City to come up with a plan. That link is still working. The Envision Laie link still works. I will never link to them again. If you want to see what they are marketing to the citizens, you can google them yourselves. HRI’s link is still working. My reference post is a really great post. Of course, it is just my own opinion and observations on the issue of development in Ko’olauloa. It is a very thorough observation, if I do say so myself.

My position has evolved since writing that post but essentially, the issues are the same. I purposely DO NOT include any background information. Please read the Reference Post if you need background on this topic. I tend to follow “the money trail” on business transactions. When you follow who stands to gain THE MOST on “the money trail” then you see the true motivation.

With this entry, I have developed a “Three-Prong” approach to Envision Laie. The three categories from which I speak from correspond with a role that I have taken on. First, I am an “informed citizen” so when I observe Envision Laie’s plans, I do so as an informed citizen of the community. I have developed my own opinions and observations over time and with the help of real life experience. Second, I view the impending development from the perspective of my ancestors. This view MUST BE addressed. Our native Hawaiian cultural practices must not be ignored. Finally, I view this from a westerner’s perspective, that being a taxpayer and/or registered voter. Please sit back and read. Stay awhile. Press play on the video and listen while you read....

The Informed Citizen's Opinion:
I have thought through the process of development of Ko’olauloa. I cannot support Envision Laie with its mega development. It tramples much of what is so beautiful about Ko’olauloa. HRI (Hawaii Reserves Inc., a for-profit arm of the LDS Church) markets this development to its followers as an affordable-housing project. Affordable like Kam IV housing project or affordable like $600k-median- price-of-a-home in Hawai’i project? If it is similar to Kam IV then I absolutely DO NOT support it. The other option - $600k is probably well outside of the realm of affordability for the average family in Ko’olauloa.Typical gentrification. HRI wants to do this to the current residents of Ko'olauloa. They want to move in the middle class and push out the low income residents. That is an easy thing to figure out.

Aside from BYUH Faculty, HRI Executives, and a select few around Ko’olauloa, $600k is not affordable. The logical thing for HRI supporters to do is to see if they will be able to afford a mortgage that high. I don’t have a problem with HRI’s attempt to make money on this deal, praying that the City Council does not allow it, but I do have a problem with them marketing it as an affordable housing project. This would mean that they are lying to the people. It will not be affordable. No, they cannot save a house for you just because your family has lived in the Ko’olauloa area forever. None of that is happening. HRI’s loyalty is to its stock holders, its Board of Directors, and ultimately to The Presiding Bishopric of The Church of Jesus Christ of Latter-day Saints (the corporate name).

Go out and see if you can qualify for a mortgage of 600k. It is pretty difficult if you consider the median income of the average resident of Ko'olauloa. This is what gentrification does... it essentially drives out the lower income families to make room for the middle-class, without regard. BYUH faculty and VP's have housing provided to them at a very discounted price. The average blue collar worker and support staff worker at BYUH (like myself)  DOES NOT have a cost of living adjustment built in to our at-will employment. We have to face different challenges to save money for a down payment on a home. On top of that, we make less money than what is paid at sister-schools in Idaho and Provo. With the recent release of a statement by the LDS church, "disavow[ing] the theories advanced in the past that black skin is a sign of divine disfavor or curse," one has to conclude that those "theories" have trickled into all LDS organization. It seems odd that the Church releases this in 2013, 35 years after it first tried to separate itself from its racist past.... but I digress!

Anyway, I think people are sorely mistaken about their support for Envision Laie. A vast majority of the people supporting it will find themselves excluded from buying a home in La'ie and their ability to remain in the town they love.


The Native Hawaiian's Opinion:
My ancestry leads to the indigenous people of these islands. One of the dying practices of our culture is the respect and maintenance of the natural environment. The Hawaii Tourism Authority would have you believe that Hawai'i is only about hula and surfing but my ancestors survived time because of their careful observance of nature. Sustainability is a buzz word in recent years. Going Green is the new industry. This development that BYUH and HRI are attempting to push through is FAR FROM being green or sustainable. It is my contention that the ag land and pasture land must be preserved for the health of our entire moku. Why does HRI want to develop to match the developments in central O'ahu (where I currently reside), west O'ahu, and Kaka'ako? Why are we not adding to the island's ability to sustain itself by encouraging more pastured animals and agriculture?

BYUH and HRI's development will drastically change the landscape and coastline, negatively. In the short run, one generation gets to enjoy brand new homes. In the long run, we are selling the health of our environment and our ability to teach the next generation of native Hawaiians about the food that comes from the earth and the ocean. I don't think its a coincidence that our culture thrived for hundreds of years BEFORE western contact. On-island food production should match the number of people on the island. Right now, we rely on ships to bring us food when we have the perfect weather to produce our own agriculture, year round. The only ones making full use of our growing season are the big chemical companies that happen to be poisoning our lands with GMO and pesticide tests... and we let them because we accept it without protest. Why would any person agree with the paving of paradise? If we follow the money trail, the people who stand to gain the most is the developer. In the development of Ko'olauloa, it would be The Presiding Bishopric of the Church of Jesus Christ of Latter-day Saints and the owner and developer of Turtle Bay.


The Western/Tax Payer/Registered Voter Opinion:
Earlier this year, I wrote a letter to Kirk Caldwell expressing my opinion on Envision Laie. I publish the letter here so you can verify with your own eyes that I did actually receive the letter. 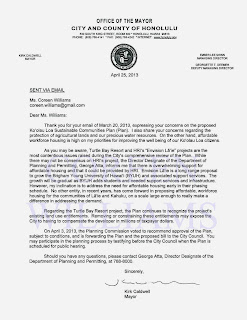 What upsets me about this correspondence is that he sides with HRI's bid to develop. His exact words, "No other entity, in recent years, has come forward in proposing affordable, workforce housing for the communities of La'ie and Kahuku, on a scale large enough to really make a difference in addressing the demand." Does this mean that anybody could come in and bull doze the land to fit their needs if they pay high enough? The letter states that there is overwhelming support for affordable housing but as I stated in the first section, what kind of affordable housing is going to be provided? More than likely it will not be a public housing development. Instead we will have homes upwards of 600k.

The public housing issue should also be brought up. I don't necessarily like the idea of public housing projects in Ko'olauloa but the City shouldn't rely on a private entity to do something about affordable housing. If I pay taxes the same as everyone else on the island then I should be afforded the same services as in other communities. There are income-based homes all over the island. Does the City feel that it does not need to service our area of the island because its HRI/BYUH/PCC responsibility to do so? We are basically being ignored by Kirk Caldwell because HRI is willing to do it. That is hog wash! If Adolph Hitler were alive and he wanted to develop a camp here in Ko'olauloa we should just allow him to do so? All of this just boggles my mind that Caldwell would put in writing that HRI came up with a plan and so we support it.

How can we support such a large expansion without addressing the infrastructure?

FINAL THOUGHTS:
I am not attached to the outcome. Whatever is allowed to fruition is a reflection of the active participants in this struggle. I cling to organizations like the Defend O'ahu Coalition as I feel their values are more aligned with my own. That is sad to say considering who my employer is. I am grateful for my job and actually do enjoy what I do. And I do enjoy a good portion of my co-workers. It is still difficult for me to go to work though as my father was one of six men that was terminated in February of this year. I will leave it at that as I cannot continue to speak on it without getting very candid about the current leadership.

There is a divide in this community and I will continue to be very vocal about how I feel about this proposed development. What one generation benefits from may be the undoing for the generations that follow. Ponder that because I honestly think that the story that Envision Laie is selling to its followers is not exactly the one they are planning behind closed doors. I have mentioned a couple times that I follow the money trail. Who stands to profit the most? Profit is the motivation. Anything else they sell to the public is fool's gold. Don't believe the hype!
on December 13, 2013