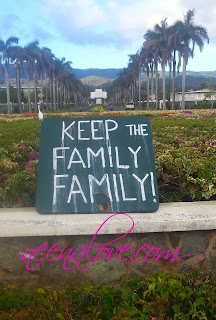 The Same Sex Marriage debate has reached the shores of O'ahu. Governor Abercrombie has called a special session to hear public testimony on SB 1, the "Hawai'i Marriage Equality Act of 2013". The first public hearing is this evening. The news is reporting that over a thousand people have signed up to bear testimony. As I write, I hear testimony is still being given, six hours later. I have thought about the issue for quite some time. The Democratic agenda has definitely pushed the issue since the military's policy of "Don't Ask, Don't Tell" came tumbling down. Last Labor Day, a friend of mine and her girlfriend did their paperwork to cement their relationship with a civil union. Now, marriage is on the table for homosexual relationships.

A family member brought up the issue yesterday to hear what my opinion is. Given that I was raised with a staunch Christian background, the natural assumption is that I would be anti-same-sex marriage but I don't think I fit into that category. Over the last week or two, I have witnessed my small circle of friends on FB post about the topic. The anti-same-sexers have been quoting scripture and talking about God's wrath and asking, "Whose on the Lord's side?" While the other camp(ers) have been spouting Civil Law, Federal Law, and all types of mandates and acts. Who is right? How do you pick a side? Do we even have to pick a side? I don't know the answer to any of these questions but each of us, as citizens in the U.S., are tasked with figuring out our own opinions. This post attempts to explore my own thinking about same sex marriage that started when a family member asked me, "Where do you stand on this issue?"

The other day I seen sign-wavers on the side of the road in La'ie. The sign said: SAY NO TO SAME-SEX MARRIAGE. The other sign (pictured above) said: KEEP THE FAMILY, FAMILY. I can't help but think of the Civil Rights movement in the 1960's, headed by Dr. Martin Luther King, Jr. Would I have been on the policeman's side, spraying down innocent people who were asserting their rights as human beings?


As I spoke with my family member about this, I told her that I was neutral about the subject. I did not have a strong opinion either way. I asked her to tell me why she felt the way she did.

Her main points as to why she is AGAINST Same Sex Marriage:
I can understand her point of view. Her view is driven by her religious doctrine and the concept of an ideal society. Strong ideals are not flaws. People with strong convictions should voice their concerns from either side of the argument. I was surprised that she did not talk about the religious philosophy behind the anti-gay movement.

My responses to her main points are telling of my neutrality.

Item #1
The LGBT movement is very strong. They are changing how our society thinks of homosexuals. If teaching about this movement in social studies is an issue for people against SSM then they have the option of sending their children to private schools or home-schooling their children. This is a tough issue because every child has the right to a free public education. Every parent must scrutinize the curriculum of their child, if this is important to them and judge for themselves where they want their children to go. I was listening to the radio and the newscaster said that this last year's graduating seniors scored the lowest EVER in the history of public education in the U.S. Maybe it's time to home school your child.

Item #2
I don't quite agree with the argument that every child needs both a mother and father in the home or that the mother/father presence somehow prevents dysfunction(?). If both parents are constructive parents then having both parents in the home could be a good thing. However, people cannot stipulate that this is the best and only way to raise children. Does having a mother and father in the home GUARANTEE a non-dysfunctional child? Absolutely not. So I offer my opinion that prohibiting people from being able to marry or raise children based on their gender identity and marital status, homosexual or heterosexual, is kind of ridiculous.

Item #3
SSM changes society. This is a true statement. I cannot refute it. SSM will definitely change society and it could be in a good way. Acceptance and tolerance are worthy characteristics of a healthy society - it begets love and kindness. The opposite is non-acceptance and intolerance - it begets hate and violence. What are people really teaching their children? That God doesn't love ALL his creations? We fall down a very slippery slope when we think it through, logically.

In terms of legality -- I think it's a slam dunk that the bill will pass in favor of legalizing SSM. Homosexual people pay taxes as do Heterosexuals, which means they should have full protection and equal rights under the law.

Some people are arguing that the people of Hawai'i have voted and decided that marriage is between a man and a woman. However, DOMA was struck down and SB1 explains it. Thus, the natural reaction to the unconstitutional DOMA is to get rid of laws that are similar to DOMA. A portion of the citizens here in Hawai'i have been campaigning to LET THE PEOPLE DECIDE. I think this is weird because the U.S. government was not set up as a democracy but as a republic. (Say the Pledge of Allegiance in your mind or out loud. "…and to the ____________ for which it stands….") When I think of democracy and majority rules, I think of a lynch mob choosing to hang a person for not agreeing with their ideals. So - I prefer that constituents let their representatives know how they feel about certain issues and let them weigh out the decision. This is the importance of getting involved in local government so that your representatives can hear your opinion.And of course you want the best person in office so that your opinion is met with agreeable ears. You have to be your own lobbyist in the same fashion that big corporations lobby in their interests. (Think of the monster corporation Monsanto. They have their hand in EVERY aspect of government both local, national, and international. Now that's scary!!!)

For religious zealots -- I find some of their behavior absolutely unnerving. I lived in Kansas ten years ago and whenever I went to the mall in Topeka I had to pass the Westboro Baptist Church to get there. I was always so bewildered that a church that espoused characteristics of Christ would treat another human being in that manner. Westboro's website: http://www.godhatesfags.com/ . Can you believe that? Their web address is telling. Their approach is bordering on a federal hate crime. Bringing that closer to home, people campaigning and picketing against allowing another human being the right to marry who they love is a crime against humanity. People love who they love.

Finally, If you're afraid that a homosexual person will influence your children in an ungodly way then you DO NOT have enough faith in how you are raising them. You are operating out of fear rather than love. People could/should teach their children that love and compassion for all living things is more important than your fear that your child will be corrupted. **heavy sigh**

Why can't we all love each other unconditionally? Isn't that what Jesus taught? Why do we have to qualify each other and judge each other when none of us have ever walked in someone else's shoes?

About a month ago, someone spoke out against SSM in front of me and I didn't say how I truly felt about it. I let her speak and to avoid conflict and possibly losing a friend, I stayed silent.
Until this every moment, I regret that I didn't speak out or try to share my feelings then. Especially when Im so passionately for the bill passing on the Federal level. I did my best today to address concerns someone had about the bill passing on FB. About 2/3 into the conversation, I realized it was pointless because the answers I was giving wasn't what they were seeking or open to hearing. So.. I moved forward.
Anyways, well said sis. With every part of my being I believe this is going to move us in a better direction as human beings. I hope we can one day find common ground and unite in love, peace and harmony <---yes, I have hope.

Neena, I don't believe anyone that believes exactly as you do could have said it better!