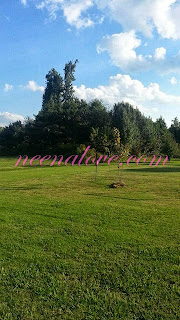 I went to bed late last evening. Woke up early. Waited two hours for husband to wake up. We finally got out of the house at 10am. Headed to Starbucks to get some caffeine in the system. It's my way of dealing with the jetlag.

Husband and I packed really light for this trip... so light, in fact, that I only packed one t-shirt with the express purpose of buying new ones here. That led me to Target where I hit the clearance rack and came away with a bunch of tshirts for $3 each. Can't beat that!

We closed out the day at the local Middle School football game. I am a big football fan... especially in small towns. I love hearing the bands battle each other, the way the cheerleaders scream at the top of their lungs for their school, the way the parents  of the players coach from the sidelines. I love it all. It reminds me so much of my own high school experience with football games. It's so nostalgic. Even now, as I sit here and write this post, I am anticipating my alma mater's football game this evening that will be streamed live on oc16.tv @1230am central time. Yes... I am really sitting here waiting to watch Kahuku High School versus Farrington High... true rivals for decades.

It was a very beautiful day today. It was hot. The skies were blue... the only thing missing was a cool breeze. The silence of the country is very "centering." As we drove around Madison County today, I admired all the cotton fields. Some fields are fully mature while others are green and still developing. I didn't have my camera handy but I will tomorrow as I travel about. When husband and I lived here back in 2009, the simple cotton plant had me intrigued. I dedicated an entire post to it.

My in-laws home is bordered by a patch of trees. In the day, it is dead silent. At night, a strange thing occurs and suddenly that patch of trees turns into a cacophony of sound. Husband says it's crickets. Me? I don't quite know what all the noise is. As we took a late night drive to find some midnight munchies, we discussed what things must have been like during the era of slavery. I am completely obsessed with that portion of American history. My heart feels heavy when I think of it and maybe that's part of the reason I couldn't be here in the south for very long. It's like the souls of the deceased and murdered slaves call to me. The sorrow of those times haunts me. So our midnight munchy mission had us discussing how lonely it must have been for runaway slaves. They had NOWHERE to turn. There were no safe havens for them and EVERYONE was an enemy. The loud cacophony of insect noises added to the fear and loneliness of runaway slaves. We see movies like Django and feel triumph that Django escaped and triumphed but is that really an accurate depiction of that era? Hardly.