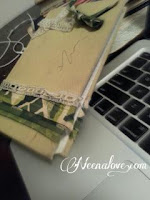 PREFACE: This is a look into my written diaries from nearly two decades ago. Most of it is straight from my diary. I may have omitted a thing or two, changed a name or two, corrected grammar, added a hyperlink here and there (for context, of course) etc. etc. The general theme of who I was all those years ago are IN TACT.

Aroha?! So wassup. Nothin' much goin' on. I just got back from the funeral. It was smaller than expected. Cliff accompanied me on the piano while I sang "My Ways Are Not Thy Ways." It was so-so. But anyway, I just got rid of Dave and everyone just got back from playing basketball. I really don't have any deep thoughts. Lately, just SHALLOW things.

So much has changed. So much I need to adjust to. I just got back from a dance. It was alright. Like I did last week, I danced with my cousin all nite. Oh well. Dave wanted to come but fo' reals doe.

Oh it was so fun the other nite, we went to 'THE STEPS'. Made a bonfire and sat around and sang songs. We met two guys from Germany -- ULF and YENZ. Okay?! They was Kool. After lounging around for awhile we went swimming. It was COLD but we handled. Will came later. Me and him bonded. On the way home that nite, I ran into Luann.

It's like 7:30 in the morning and Dave is right here. He is irritating the daylights out of me. He's around me 24-7. I get no privacy or no time away from him. That's all I ask. In fact, I feel like breaking up with him but I don't think he's gonna like it too much. I just wish... oh well, so much for wishing. His car broke down and he's asking me for money to fix it. Supposedly, the water pump broke. He's tryin' ta get my dad to fix it but he is goin' to a meeting. He makes me so mad. So irritating.

I spent the whole day with Shane. We mostly just slept all day. I got my period today. So I showered at Shane's house and all-a-dat. you know what happened... Pac stepped to me. He asked me when he'd get the chance to get the "DRAWS". And was talkin' about the two of us kickin' it after Shane leaves in November. I was surprised but at the same time disgusted. I mean he's bein' a DAWG. He's disrespecting Shane by doin' it and also myself by asking. He was really blunt. And the thing about Shane is that he's mature but still... a child at heart. Ya know?! I feel comfortable with that. And as hard as it is to admit it, I am beginning to care for him more than I should!