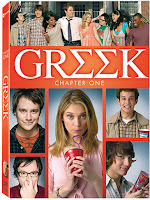 Over the weekend I had plans to watch the new Pirates of the Caribbean. I had to rethink that because I didn't really want to be packed into a theater on opening night when I could watch it during a matinee and have the theater almost all to myself. So this past weekend I opted for Netflix Viewing. I took in 9 episodes of the show GREEK.

It is based on the Greek system in colleges and universities across America. I never quite understood the Greek phenomena aside from the magic of a step-show. My ex-husband was part of a fraternity, Omega Psi Phi, and he was branded on his arm. It looked painful but I suppose it was something important to him for him to allow someone to brand him. I mean no disrespect when I critique his choice. It is what it is.

I thought it interesting that at our (me and the ex) wedding reception a guy recognized the actions and behavior of my then-husband as Que-doggish. He was a guest of a friend of mine. I had not met him previously so did not know that he too was a Que-dogg. They had a conversation that seemed to include all the "signals" of their organization. I don't know what the draw is for Greek organizations. My bloodlines, at least in the last 200 years or so as far as I know, do not lead back to Greece. So, what makes one desire to "pledge" to the fraternity/ sorority?

The television show Greek is a one-hour teenage drama. It seems to promote drinking and promiscuity while trying to maintain academic excellence (not). Odd, considering that the show airs on ABC Family. Is that what is considered family values now? The world is so confused as to what, exactly, constitutes family values. No one can agree. No philosophy is all-encompassing of the different types of social behaviors that are in the world. **sigh**

As I watch the show, I'm intrigued by the characters. They all appear to be versions of people that I know in real-life. Does art imitate life or vice-versa? What is good entertainment nowadays? There's tons of kissing and allusions to sex. Is this indicative of the normal college experience? Husband is not interested at all in the show. He was irritated that the only black male on the show happens to be the gay one. Is this a true sampling of society at large? **shrugs** What I do know is that I am probably going to finish off the series because I'm 9-episodes into all the characters.

i was totally addicted to that show. i don't know what it is about teenie bopper drama...but its like a dead dog on the side of the road. you know you shouldn't look, but u can't help not to. anyhoo...crazy huh that its on abc family??? i was surprised about that as well.

my husband is an Alpha. he graduated from an hbcu in NC. i believe it's his black heritage that pushed him more towards it, only because I don't know of any Samoans pledging. he was the only Samoan I knew of in a frat, until we met another afakasi at a recent gathering. they were super excited to discover that fact about each other and shared/compared stories remainder of the day. i guess it's kinda like running into kahuku alumni in some remote area of the world. it's a process only we would ever understand.