Today was husband's birthday. All he wanted was his favorite foods for dinner. (Men are so simple)

My sister-in-law also made some Salmon Croquettes. She's pregnant and had a specific craving for it.


My pride and joy, however, was the birthday cake. I made a three-layer chocolate cake. I made a chocolate ganache for the layers and a chocolate butter cream frosting for the outside. It was so scrumptious and unbelievably simple. I sniped the recipe from the Food Network's Barefoot Contessa. 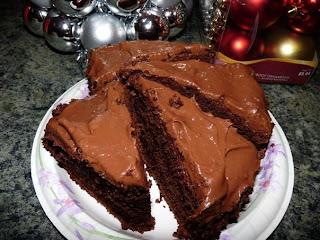 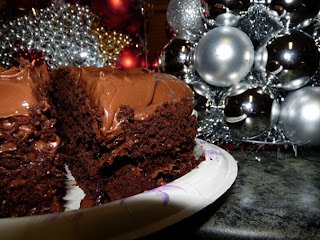 I really should have taken pictures of everything but it all looked so good that I couldn't get the camera fast enough. The salmon was extremely tender and so very delicious. But I just can't stop thinking about that cake though. Yumm! It was so moist and rich. I should make this kind of decadence for a living. Serious!

I was over at one of my favorite blog's, The Brown Blogger, and he mentioned toward the end of his The Weight post how he and the wifey were 1099 workers. As I understand it, 1099 workers do contract work. For instance, (true story), say you find out that McDonald's is in need of a grounds maintenance person. You gladly submit a proposal detailing the services you can provide and how much it will cost. At the point of acceptance, McDonald's (in this case, the franchise owner) hires you on but not as an employee of McDonald's but as a contracted worker. Thus, you are paid according to agreement. McDonald's is not required to do any government withholding. BTW: 1099 references the document that replaces a normal W-2 from an employer. Yes, this example is a true story. I did the paperwork for my father to gain a contract at the local McDonald's where he lives. He did their grounds maintenance for a few years. I'm so glad he gave it up.

So anyway, I mention that only to say that I've been interested in doing this kind of work for quite some time. Not the ground maintenance part, even though it has crossed my mind, but the 1099/ contract work deal! In the last four years or so, I have had a great desire to "own my time" so to speak. XYZ Corp could hire me to cater their party. (I am kind of a whiz in the kitchen.) We do a contract detailing the services that will be rendered and what I will get in exchange. I would be open to bartering for services because I don't think I'd have to pay a tax on that. I wonder?! Hmmm... Anyway -- if everything is agreeable we have a deal. I cater the party, they pay, and that's it! No 9-5 to enslave me. If I wanted to take a month off to go home to Hawai'i, I could by simply blacking out my calender. If I wanted to, I could take jobs in Hawai'i. The possibilities are endless.

The really great part about me revisiting the idea of being a 1099 worker is that my husband sees the light! His lack of support in previous years discouraged me from pursuing it... but now, he's finally on board, and has a desire to try it out. I'm so stoked. I'll definitely keep you posted!
on December 15, 2009

DO IT!!! The South is in dire need of good local food! I always tell my hubby that local food would make a straight killing out here! Southerners love good home cooking!! Oh pleeeease DO IT!!

A Happy Belated wish goes out to your other half.

Thanks for the shout. Appreciated always.

Being self employed has enabled us to have the freedom to manage our time they way we want and to travel the country this year. I say get R done because you can successfully do projects that can have you at the airport more than you think.

Also, being a 1099 guy isn't always about doing project work like my wife does. I own a sales consulting firm and require my staff to be independent thus eliminating workers comp, general liability issues and health care, thus putting the owness on them to provide these deductible expenses.

All I know is that is CAN be done and you CAN do this successfully. This isn't rocket science and it eradicates the job mentality that most of us have.

We need more business owners. Anyone can do this. To hell with unemployment numbers! That system is for suckers.

We'll talk about it soon...

wow! tell me more!! so love the idea!