Courtship, Movies, and Me

I remember watching the movie Pretty Woman, starring Julia Roberts, when I was in high school. My friends and I fawned over the modern-day cinderella fairy tale where the prince elevates the lass out of her unfortunate condition. Julia Roberts, the small-town-girl turned prostitute, is Cinderella. Richard Gere, a financial tycoon, is the prince who happens to be an emotional retard. They are drawn together by a set of circumstances and the prince begins to court the girl.

Courting seems like a dead art nowadays. The 'build-up', the liking stage, the passing notes back and forth during class, the talking on the phone or the meetings in the library have all but faded away. Conveniently, it has all been replaced by instant messaging, MySpace, Facebook, and unlimited texts. I can't say that one way of courting is better than the other. Just different.

There's a scene in the movie where the prince sends the "ho" shopping so she can get better quality clothing to be able to accompany him to business events. Because his pockets are lined with cash, he is able to command the full attention of the staff in the boutique. What woman would not want an all-access pass to their favorite store and be waited on, hand and foot? Another memorable scene in the movie shows Julia Roberts in a red velvet gown. Richard Gere accompanies her to a limousine, heads to the airport to board a private jet, and they are whisked away to San Francisco to attend an opera. Does this ever happen in real life? Do movies like this shape our expectations of a prospective life partner?

As we age, the dreams of being whisked away from our present conditions become but a fading fascination. Over time we deal with men who grow up with a different reality. They don't grow up wanting to be Richard Gere, searching for a woman to sweep off their feet. If they do, what are the odds that "he" will end up on your doorstep? Many of the guys I grew up with were fixated on being an action hero, think David Banner whose temper turned him into the Incredible Hulk or Clark Kent whose ultra-shy persona gave way to Superman whenever the world was in crisis. There were the guys infatuated with becoming a Kung Fu superstar ala Bruce Lee or even Bruce Leroy (Taimak's character in The Last Dragon). Some even grew up thinking that Doughboy from Boyz N the Hood was a worthy role model, that Jake Heke in Once Were Warriors was the ideal husband. I surmise that the "heroes" in our lives play a big part in who will be. Though I love watching Pretty Woman, that's not the story I would write. My husband loves watching sci-fi but I know an alien won't pop out of his abdomen anytime soon. I will never marry Wolverine or scamper off to 7th Heaven with Bruce Leroy. Yet these are the images we see that show us what "courting" is like or even how relationships should progress.

In the final moments of Pretty Woman, Richard Gere rides up to Julia Roberts run-down apartment in his "chariot", a white limousine, drawing his modern-day sword, an umbrella, and climbs up the fire escape to collect his damsel. Que the music, roll the credits, and the movie is over. When exactly did he "court" her? When he paid for her services? After he took her on a shopping spree? After she escorted him to a business dinner or a social event at the polo field? When exactly did the courting happen? By the way, I happen to love the brown dress she wore to the polo field, coupled with that hat -- the outfit was a real class act for the bourgeouis country-club folk! In real life, when does the courting happen?

I think of some of the closest people in my life. I have an aunt who had a fairy tale wedding, complete with 8 bridesmaids and groomsmen. 15 years into the marriage and six children later, the husband has an affair and the marriage becomes irretrievably broken, yet they stay together for another eight years. They finally divorced last year and I just found out that he just married a woman with five children. Is that the going trend? 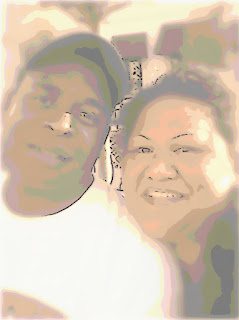 A woman very close to me is pregnant with her third child (all of them have the same father) and is still unmarried. Did she even understand the "courting" ritual or just the mating part? I know a woman who refuses to marry because marriage would make her ineligible for Section 8 housing. Is the modern romance more similar to Tyler Perry's Meet the Browns? Has courting digressed to sex and children first before marriage? Is marriage even an option anymore? I'm not sure if FDR foresaw the trend of young women choosing to be single to qualify for welfare when he made that a requirement to receive aid. If you were married, you became ineligible. Whatever the reason for the growing trend of broken marriages and single-parent homes, I suppose it gives me fuel to keep my marriage going, to be a part of the statistic for couples that stay together.

My husband and I are part of an eternal pair. Though our courtship wasn't exactly what fairytales are made of, we are committed to keeping our love alive. Sometimes it gets hard. We're approaching our sixth wedding anniversary this coming Saturday. Sometimes it's hard to be in love but I'm hanging on to preserve the eternal pair that we've become. My fairy tale will progress through eternity, God-willing.
on November 10, 2009

Email ThisBlogThis!Share to TwitterShare to FacebookShare to Pinterest
Labels: courtship