I was sitting in an interview with a scholarship counselor for Kamehameha Schools. The counselor asked me what direction I'd be going in with my education. Up until that point, I had never thought about it in depth. I just thought that I'd go back to school, apply for the scholarship and make full use of the resources that are available. There is so much funding out there for people of Native Hawaiian ancestry through the Bishop Estate. Bernice Pauahi Bishop, a member of the royal family before the overthrow, established a trust for the children of Hawai'i to provide for their educational welfare. The Bishop Estate is one of the largest, most wealthy estates in the world.

There I was sitting in the interview, scanning my mind for an answer, really wondering what I'd do with my education. Of all the infinite number of answers I could have given, I blurted out that I'd like to establish a Leadership Academy to educate kanaka maoli (aboriginal people of Hawai'i). I hadn't expected that the interview with the scholarship counselor would be so intense. However it forced me to formulate in my mind, within seconds, the driving force behind my desire to return to school. I've kicked around the idea of going to law school. I've experienced a certain amount of satisfaction and have displayed proficiency in reading and analyzing legal documents and figured that might be an avenue to pursue. I've thought about majoring in English due to my love of the written word. I've also thought of taking up History, so as to be able to influence future generations with real history, objective history. Even though I had thought about a major, the real application of it manifested itself in a simple blurb: I'D LIKE TO ESTABLISH A LEADERSHIP ACADEMY TO EDUCATE KANAKA MAOLI!

My mother is Samoan. Her language and culture are still intact in a way that never was for my Hawaiian father. I think of my father's generation as the "assimilated Hawaiian's". 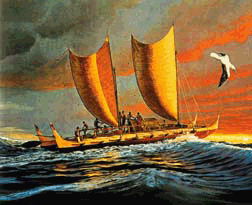 The language was effectively colonized out of Hawaiian society until the renaissance of Hawaiian culture in the 1970's. This renewed interest came on the heels of the successful voyage of the Hokule'a, a traditional Polynesian double-hulled canoe. The crew of the Hokule'a successfully navigated their way, in traditional Polynesian fashion, without the use of modern seafaring instruments. It would be many years after that maiden voyage before we would see a resurgence of the Hawaiian language.

The development of "immersion" schools began to take shape in the years following Hokule'a's historic feat. They were modeled after Aotearoa's (New Zealand) Maori Immersion program where Maori children would be totally immersed in the language of their ancestors. Hawai'i followed suit and developed a successful program that still exists today. Hawaiian used to be the official language of the State of Hawaii. I'm not sure if that is still the case. To hear it spoken in leisure today is an enormous feat, considering it was on the brink of extinction just 25 years ago.

I have to give the Department of Education in the State of Hawaii some credit for requiring the study of Hawaiian history in the public school system. You can expect to review the Hawaiian monarchy at the 4th grade level, the 7th grade, and the 11th grade. (I wonder if the Oklahoma school system requires the study of Native American history. Does anybody know?)

There are several immersion programs in Hawai'i beginning in pre-school and continuing all the way through high school and beyond. There is a highly developed Hawaiian Studies program at the University of Hawaii as well as BYU-Hawaii. Even with all these things in place, I felt there was a few components missing in influencing a generation of kanaka maoli. I would like to see LEADERS. Real leaders with the ability to reason within the context of their culture and moral human behavior. Philosophical leaders that esteemed themselves highly and would take full responsibility for teaching and perpetuating their values.

I have not fully developed the idea of the LEADERSHIP ACADEMY but I find that it might be something worth looking into. First, because it instantly sprang from my mouth when I was asked what I'd like to do with my education. Second, I think it is a worthy goal to pursue in contributing to the preservation of my ancestral heritage. I love Hawai'i!

I believe we are each placed on this earth for specific reasons, to serve humanity with our unique talents and abilities. I feel privileged to be made up of the DNA that connects me to Polynesia. I feel such great pride to have a degree of melanin in my skin that makes me not-white. May the Creator find purpose in me to do HIS work and not mine.

God bless you in your endevors! I thought you might be interested in tonight's report on KGMB. It kinda goes along with what you were saying in this post. Here's the site: http://www.hawaiinewsnow.com/Global/story.asp?S=11461977