This is my first entry associated with my Journaling Challenge that I mentioned in my previous post. I sat down and just started writing. I wrote whatever came to mind without editing it and four or five pages later, I realized that I wasn't even answering the question. I tied it all back in as I closed out the post. There are no right or wrong answers. 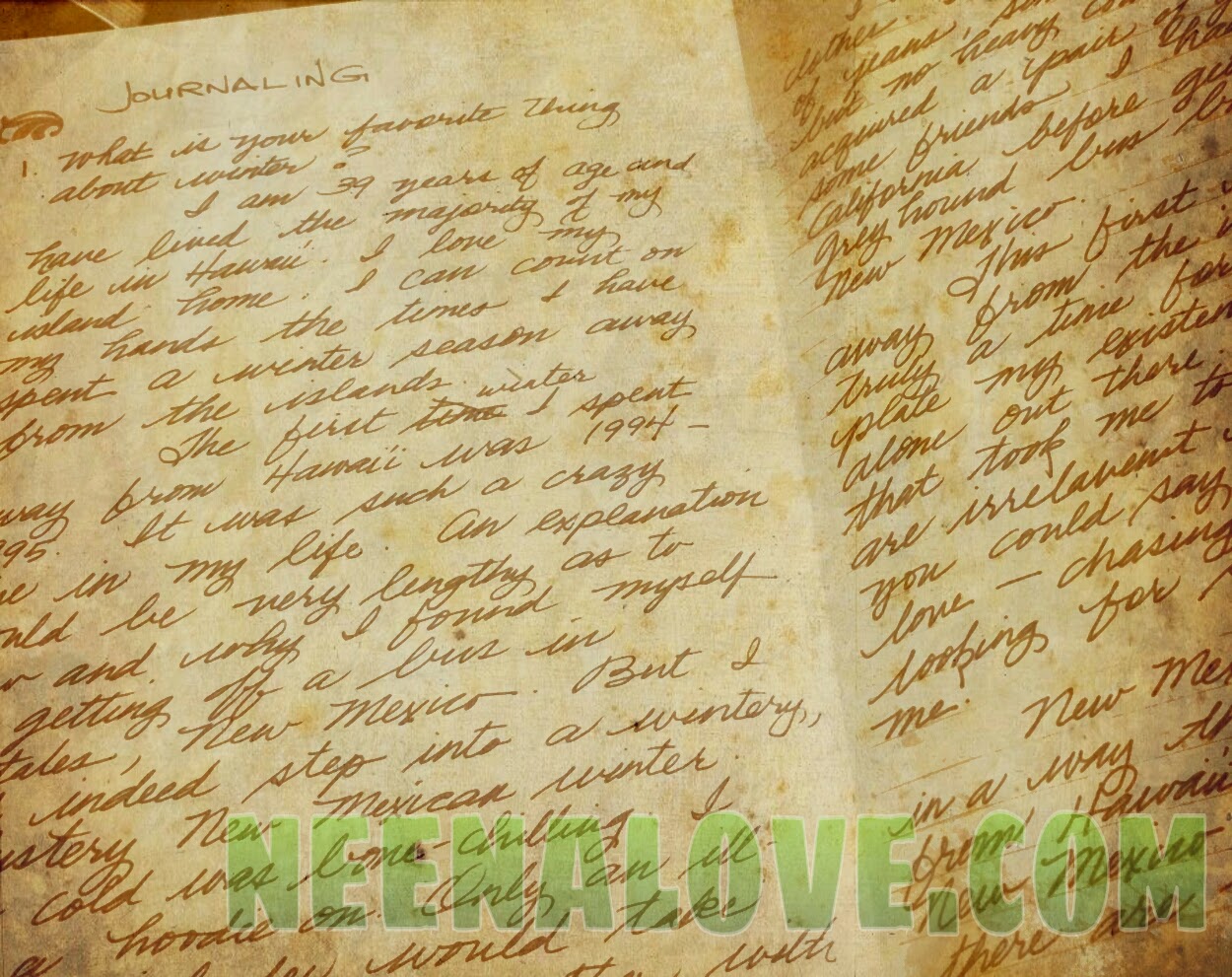 1. What is your favorite thing about winter?

I am 39 years of age and have lived the majority of my life in Hawai'i. I love my island home. I can count on my hands the times I have spent a winter season away from the islands.

The first winter I spent away from Hawai'i was 1994 to 1995. It was such a crazy time in my life. An explanation would be very lengthy as to how and why I found myself getting off a bus in Portales, New Mexico. But I did indeed step into a wintery, blustery New Mexican winter. The cold was bone-chilling. I had a hoodie on. Only an ill-advised islander would take on twenty-degree weather with a hoodie on.

I did not have warm clothes. I had a couple of pairs of jeans, some long sleeve shirts, but no heavy coats. I had acquired a pair of gloves from some friends I had visited in California...before getting on a Greyhound bus bound for New Mexico.

This first winter season away from the island was truly a time for me to contemplate my existence. I was alone out there. The circumstances that took me to New Mexico is not relevant now but you could say that I was chasing love, chasing independence, looking for something to define me.

New Mexico is very beautiful in a way that is vastly different from Hawai'i. The majority of New Mexico is rural, meaning there are very little street lights. This makes the stars in the sky so very bright. You can drive for hours in some areas and not see a single soul. It is a great place to disappear. The land is flat in the area where I was. Tumbleweed is definitely in abundance. There's cactus and sand and dirt and when it snows, the flat land is covered in a soft, white blanket. It is quite beautiful.

I had just turned 19. My eyes and my life experience was still so limited. Almost innocent. I had a deep hunger for new experiences. So it was ideal to be in the wintery desert. The cold is just not for me though. Even now the thought of being in the cold is painful. When the temperature dips below 70 I get a little irritated. I dislike being in the cold and all the extra layers of clothes that come with it.

I was so inexperienced at dealing with the cold conditions. I remember a particular Sunday when I woke early to go to church. I drove my boyfriend's car that morning. Being that it was so early in the morning, there was no one on the road. I thank the heavens for such tiny favors. I had not known at the time but the road had frozen overnight. They call it black ice. As I made my way to church that morning, I went into a crazy spin in the car. I must have spun around (360 degrees) three or four times. Like I said, I am so very lucky that no one else was on the road. When the car came to a stop, it was pointing in the direction of my apartment. I obeyed and went on back. My heart was still thumping so hard. I will never forget that.

The winter proved way too much for me and by April 1995 I found myself back in the Hau'ula. I swore I'd never leave beautiful Hau'ula again. I say all of this only to say that Hawai'i winters are my preference. And my favorite thing about Hawai'i winters, oddly, are the rainy days.