Aroha?! Well, I'm on my way to the States. Excited. But you know somethin'... I miss Shane. It was good to be with him before I left. He came to the terminal. Of course it's on Hickam so it was not a problem! I think?! :-) Anyway... I was standing by the pay phones. That's where he said he'd come. I turned the corner and there he was. I was so happy. I thought he wasn't gonna come. Why I thought that, I do not know. It was so neat cause he took me out on the flight line. He showed me all the planes and their purpose. Talk about grand tour. After we came in from the flight line, he went to smoke a cigarette and I went and got the camera. I couldn't conceal the happiness I felt. It was written all over my face. No doubt about that. Then I made Michelle come and take a picture of he and I cause I don't have one. Then she wanted Shane to take her on the flight line. She's so funny.

Shane and I was just rappin' about this two week separation. Dang, I miss him already. Slow tears falling. All i have is this tiger to remember him by. The one he bought for me. We were walking to the plane and Shane pulled up in the truck and we said goodbye one last time. Tonight, I had the urge, when he pulled up in the truck to tell him -> I LOVE YOU -> but I didn't. He might think it's too soon for all that. And with him leaving in November, LOVE will either make it or die fast and hard. I want us to at least be friends cause he is a friend worth holding on to!!

Thomas was hounding me this morning. Of course, I was irritated. Just leave me alone!! Naw but fo' realz, I feel his love for me but mine just ain't there. I told him "I'll always love you" but as a friend and nothing else. He's taking it the wrong way as if my love is romantic. At one time between the two of us, it was a romance. That has all changed. There're so many pressures in our relationship. So much elements breaking it down and not enough building it up. I think he refuses to accept the fact that things just aren't working. Those L.T.G.'s always gettin' in the way. You know what, I don't even like talking about it anymore. I feel guilty that I have to leave Thomas like I did but my space and time... I'm taking what's mine. 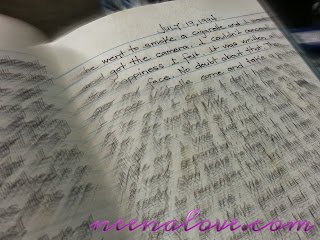