This article appeared in my news feed on my Facebook page. I'm not a CNN or FOXnews person. However, I subscribe to the local news because I find some of it interesting. I don't normally watch the news.

The linked article above states that a lesbian couple is suing the owner of a Bed&Breakfast here on the island. The owner refused service to the lesbian couple. I know this type of discrimination reminds people of the tumultuous Jim Crow era in the United States just a few decades ago. There are obvious differences!

I am somewhat sympathetic to the homosexual movement. If they want legal rights under man made laws, I think they should have it. In this case, I don't know what the lesbian couple is attempting to do. What is the outcome they are seeking? This is what I hear from their lawsuit (excuse the sarcasm):

Angry lesbian contacts her attorney.
LESB: "That place won't let me in. I want them to let me in. NOW!"
ATTORNEY: "Ok. I can help you."

Lesbian contacts the media, under the direction of the attorney.
LESB: "We're suing XYZ Bed&Breakfast because they won't let me in."
NEWS: "Oooh... news for Hawai'i residents. Thanks for the heads up. We'll watch what happens in court."


What are the legal precedences that have been set around the country for similar cases?
**shrugs**

Can the owner include in his or her contract or lease or check-in document that they refuse service to Gays and Lesbians?

If I recall, there are signs at several establishments that read:
"We reserve the right to refuse service to anyone."

Looking at my sarcastic dialog above, if we replaced LESB with DRUNKGUY or PERSON.TRAVELING.WITH.PETS, would this be a lawsuit?

If a non-Mormon were at the footsteps of the Mormon Temple and were refused entry, should the non-Mormon sue for entry?

Country Clubs are "exclusive" groups, should I sue?

I don't understand why the law would impose itself upon a private establishment. If I were a business and refused service to someone based on my personal preferences, why is that NOT okay? Should someone disregard their personal values and adopt the social norms?

At what point can a person or establishment have an opinion without fear of government interference? 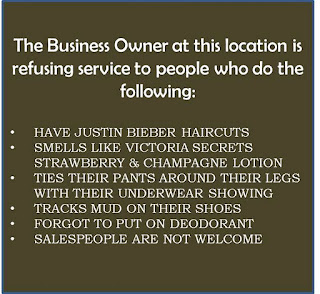