My commute to work is now 50 minutes, where before it was 5 minutes. Since I made the move in February to the central part of the island, my need for entertainment during my commute on the way to work has increased! I am relagated to static on the radio or my tiresome CD collection. It dawned on me yesterday that the Public Library has Audio Books to be borrowed! I took myself to the wonderful, Kahuku Public Library. They don't have a huge Audio Book selection but the ones that they do have are popular choices.

My first selection is The Kite Runner, by the same author of A Thousand Splendid Suns. The storyteller on the audio book is the actual author, Khaled Hosseini. It's a wonderful thing to hear the proper pronunciation of the ethnic words. The language rolls off his tongue so beautifully and I feel as if he's telling me HIS story. 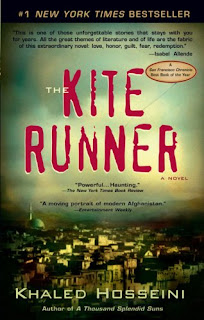 **Disclaimer -- if you are currently reading The Kite Runner or have future plans of reading it, STOP reading this post NOW!

The story begins in the mid-60's, pre-communist, pre-Taliban era, in Afghanistan. Just how the author pronounces Afghanistan is so beautiful! It's like the 'g' is silent. Af-hawn-nee-stawn! The central character and the narrator of the story is Amir. I find myself saying "Amir jan" so often, trying hard to imitate the author. The story unfolds as Amir tells the story of Baba (pronounce baw-baw), his father, and Hassan the son of their servant, Ali.

There are so many similarities between Afghan culture and Polynesian culture. One of which is how you would call anyone older than you 'uncle' or 'aunty'; because we are all connected, we are all family! This is in extreme contrast to American/ British culture that always requires Mr. or Mrs. or Miss, Massah, indicating the difference in social station.

Baba and Hassan have a special relationship and Amir struggles to keep up with their growing affection for each other. Amir points out that Hassan is the son that Baba wished Amir could be - athletic, tough, able to stand on his own two feet against bullies, loyal! While Amir preferred books and poetry.

Amir recounts his life in Afghanistan before the intrusion of war in the 70's, how carefree it was. When he turned 18 though, the country had become so over run with Soviet presence they are forced to exit the country to Pakistan and eventually on to the United States.

I find myself feeling completely drawn into the political landscape of Afghanistan because of Khaled Hosseini's writing. My point of reference is my own homeland, stolen from beneath my ancestor's feet. Just as Amir and his Baba had to leave their beloved country, at times I feel like I must leave Hawai'i to preserve my peace of mind. It becomes taxing on my soul to see the continual injustices of the day yet running away from it doesn't bring peace of mind. There will always be a gnawing in my na'au, in my bowels, to want more for my people.

Amir exposes himself in so many shocking moments. It instantly makes me think of how our lives are just that, a series of shocking moments knit together. What we do with our opportunities, whether we live up to the expectations of our ancestors or cower in the face of struggle, determines who we are in each moment.

The story reads like a huge historic, political narrative and yet at the heart of it is Amir and his life. He is a witness to several atrocity's, probably more than the average person has to bear. Growing up without a mother, witnessing rape, murder, the passing of his father, and also dealing with his own insecurities that lead him to behave less than honorable. It's heartbreaking, downright cruel but joy always follows! By the end of Amir's story, he emerges from the darkness of his life by atoning for his past indiscretions. He returns to Afghanistan and rescues the son of Hassan who is left an orphan by the Taliban.

The story closes, not in a sugary-sweet, saccharine kind-of-way, but real and honest yet hopeful! We are all looking for redemption from who we think we are, who others define us to be, and who we genuinely are. Unraveling the layers that mold us into a certain way is our challenge. It is not impossible to change from what we are in the past to a better person in the present. That is what I strive to do -- to revamp who I am in every moment. Help me do this!

OH I LOVED THIS BOOK TOO, THE MOVIE DID IT NO JUSTICE OF COURSE.

I saw the movie, and was too afraid to read the book because i heard it was too graphic. i guess u could say i'm a wuss when it comes to stuff like that. but i heard it was great.