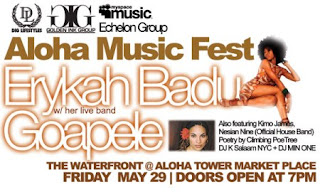 It's called the Aloha Music Fest. I'm not sure if this is a new annual event here in Hawai'i but I'm so glad it's here! They handed out fliers at the Ladies of the 80's Concert I attended earlier this month. I've been looking forward to this ever since and it's finally here! The venue: Aloha Tower Market Place. Beautiful setting on the waterfront!

Friday's festivies feature a local group, Nesian Nine. I'm not sure if they do original music but they surely do cover a vast selection of 90's R&B. They will be the "house band" for the evening as other local R&B artists sing their hearts out. I love the whole live band sound cuz singing with a CD backing you up is just KARAOKE!!

Opening for the feature act is Goapele. I wonder what that name means. Does anybody know? Anyway, I really love her vibe and I'm so looking forward to hearing her live and in person. Ok... not really trying hard, I found out what Goapele means and how it is pronounced. According to about.com, Goapele is pronounced gwah-play. It means to "go forward" in the South African language Tswana. (Info Source)

The headlining act is Erykah Badu with her band. I'm almost as excited as I was when I bought tickets to the Prince concert in San Francisco, about 10 years ago. Only difference is, the promoters of the Prince concert cancelled due to scalpers purchasing a ridiculous amount of tickets. **heavy sigh** That was a sad moment in my life. LOL... Til this day, I have yet to see the Purple Majesty perform live. Of course Erykah is nowhere near Prince status for me, so comparing the two is downright silly. But still, I'm excited! Here she is, performing one of my favorite songs, I Want You.

oh man...you're making me wanna go. but i just don't if i can part with $50. it's the chang side of me. erykah? or save for europe? ahhhhhhhh....decisions decisions.

Man. I wanted to go to this concert SOOOOOOOOOO badly!! Love Goapele, LOVE LOVE LOVE Erykah. I believe in second chances, though--one I WILL see her in concert!