Well, I made it back from my family reunion -- all safe and sound and snuggly. I'm so glad to be home. I have realized that I'm such an island girl. The idea of being landlocked disorients me. I need to be near the ocean... near the Pacific ocean.

The family reunion was a total success. No contention. No drama. No complaining about activities. It was GREAT! We were small in numbers considering the number of people in our family but it was a great turn out, this being our first reunion. 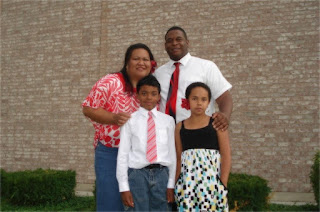 Husband and I were able to spend time with his children. They flew up to meet us. So that made me an instant mother for the weekend. It was a different experience. One that I would have to blog about in-depth. I will get around to that as soon as I get over the jet lag. The kids look like my husband and according to him, could pass as ours. The children had a blast meeting with their cousins and I enjoyed seeing them mix and mingle with the family. It was funny how husband and I were so stupid at parenting. Breakfast? He and I ALWAYS skip it and we shouldn't have made the kids skip it also but leave it to us to be stupid parents. LOL. As I stated before -- I will blog more about it later.

All the events and activities went off just as cousin and I had planned them. My cousin... the girl in this picture was my co-planner for this reunion. I'm so excited that she's getting stationed here in Hawai'i. She's an officer, excuse me -- a captain, in the U.S. Army and I couldn't be prouder of her. Her skills as a leader translated into the execution of this reunion. Hallelujah!! So this is my plug for her because she's single, successful and looking for Mr. Right. She grew up in southern Georgia and is now making her way to Hawai'i for the next 3 years. Any takers? LOL... Of course this is a picture of her looking a little rough -- but still beautiful as ever. 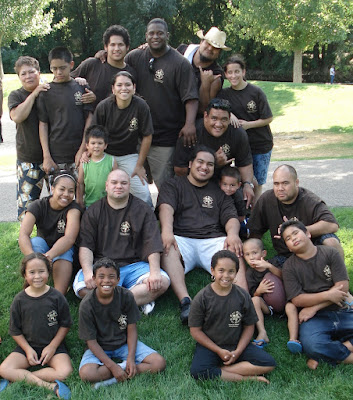 The food was alright -- nothing extravagant. We settled on the next reunion being in Hawai'i in 2011. Consequently, that means I'm planning it again and so is my cousin since she'll be here in Hawai'i as well. She and I swore up and down that it wouldn't be us again. The one good thing is that we'll be planning it here in the state we reside. Yayy!! My resources are so much more broad here in Hawai'i than anywhere else. I'm pretty excited about planning it for 2011. That gives me three whole years to work some magic.

One of my goals for this year was to bring this reunion to completion. It happened. Now I'm done and on to my next project... release 50 pounds. Monday, August 4th -- I begin my journey toward releasing 50 pounds FOREVER!
on August 01, 2008

Email ThisBlogThis!Share to TwitterShare to FacebookShare to Pinterest
Labels: reunion

Well - congrats on the reunion finally being done and over with. The pics look great. Somehow, I never knew you were in Hawaii. Not sure why I didn't know that. But yea, I didn't.

looks like you guys had mucho fun! congrats on completing that goal! now to start on that other goal! i'm sooooo excited! did you start the books yet? well....i'll call you tomorrow to plan out our plan for our RELEASE!