His Name Was Thomas: Part II

Note: This is, of course, just my story.... he'll probably tell it differently. So here is Part II of what is turning into my own little mini-series, His Name was Thomas....

As I was saying, Thomas and I was diggin' each other. I had forgot about my original motives for gettin' with him. Things were going well... thennnnnnnnnnnn..... FIRE no longer IN THE HOLE!!!!!

Yes! That original FIRE was beginning to lose it's fuel. We did everything so quickly. We went from flirting to dating to moving in with each other within four months. We were talking kids, marriage... the whole nine! It was all so fast. I was 18, he was 24. It was a little much.

But I really need to tell you how the magic happened so fast and lost its luster so quickly. Thomas was the Cinderella interpretation of Prince Charming.

He just swept me right off my feet and the floor I was walking on. Here I was, fresh outta high school, having dealt with knuckleheads from the neighborhood and just not KNOWING what was out there. Then enter Thomas from Somewhere, U.S.A..... having never seen or dealt with an island woman. He was mesmerized. I was mesmerized.

Okay... so I'm used to shy guys... Because Island Boys have a tendency to go REALLLLLLLLLLY slow and they actually wait for the ladies to make the first move. BORING!!! Prior to Thomas, I was used to guys sending messengers. I wasn't expecting Thomas. I mean he was like... a breath of fresh air. He said exactly what was on his mind... didn't try to sugar coat things, didn't send messenger boys or messenger girls (even though sometimes that stuff is kinda cute). I loved it. 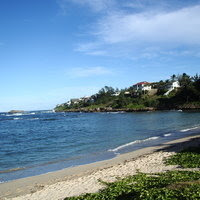 I remember once, in the beginning, I was so excited about seeing him and couldn't really get out to his place that often because I was always busy doing something. It was a Saturday and I was doing laundry. The phone rings. It was Thomas. The butterflies in my belly was RIDICULOUS... fa real. He called to tell me he was thinkin' about me and was wondering how I was doing and when he'd get to see me next. Everything was still brand new. We were still hella excited about the possibilities.... five minutes later, he pulls up with some flowers. I'm lookin' raggedy but he didn't seem to mind. He planted kisses on me and we made plans for later that evening.


Valentines Night, 1994... he came out to see me. He brought a bunch of his friends and I huddled my girls together.... it was ONE BIG PARTY. We ended up at the "point" that evening... just hangin' out and drinking. As the evening wore on, we both decided we needed some one on one time. So we took off to Temple Beach (see picture to the left). We walked and talked about love and about the possibilities of he and I hooking up. We were excited. The conversation led to our relationship history and this is where things really should have ENDED with us. He was separated. I should have told him to come back at me AFTER he's divorced.... but I was caught up with the excitement of what had already begun. **sigh** I was fresh outta high school, no children and really should have just avoided the married man with three kids. ... but I didn't! What kind of story would this be if I did?

So there I am on the precipice of doing the right thing... by leaving the married man alone OR doing what I wanna do... by continuing on with what had already BEGUN.

So what did I do and what happened?

Email ThisBlogThis!Share to TwitterShare to FacebookShare to Pinterest
Labels: relationships