Prison is not exactly the place I'd like to go searching for a mate. I know every situation is different. I know of women, family members, who have or had relationships with inmates. I have never thought of breaching anyone's privacy by actually asking the people that I know why they have relationships with men behind bars. Even though I'm super nosey and extremely inquisitive about things that I don't understand, I just haven't found a good enough reason to ask.

Looking at why people even want to be in relationships is where my opinion stems from. Why do people search for mates?

I remember when my ex and I got separated, I agreed to it under the premise that he was returning home to help his mother out and that he'd be back to be my husband. Throughout our separation, I longed so much for companionship. I longed for his physical presence and for attention that I felt I deserved.

So this brings me to my question about relationships with inmates. The inmate has to sell a really intense story to the civilian for him or her to even be interested in trying it. There has to be some hot romance coming through via letters. Though I have to admit, the letters are probably hot and steamy as well as laden with heavy romance, letters DO NOT make a relationship and I'm a letter person.

My ex and I exchanged letters for a couple years before we finally married. Then when we separated, once again, I assaulted him with all kinds of letters and cards. (Secret: I still have all the letters. I've been meaning to take it to work and run it through my huge shredder... but I think there might be a book in those cards and envelopes.) I swooned over the letters he wrote me before we married. The words on a page always made me feel good about the distance and the time that separated us. It made me believe in something that didn't really exist except as it did in my mind.

Is it impossible to have a long and lasting and joyful marriage between an inmate and civilian? No. Nothing is impossible.

Is it likely that the marriage or relationship will last? **shrugs**

What I do know is that long distance relationships, no matter the reason, do not work all that well. I think of all the time I wasted waiting for my ex to come to his senses. When he finally did, it meant divorce, and I'm okay with that except that I wasted the prime years of my life waiting for HIM. 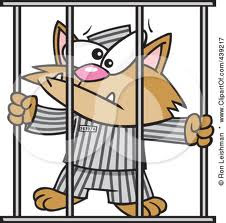