The Weekend in Review

Happy Birthday Babe! Today is the big 20+10 for husband. Yes! He is 30 today.
Normally on a Sunday, at this hour, we'd be at church doing our normal duties. Me on the organ, husband helping the deacons. But today is not a normal day and this weekend has not been a normal weekend.
It all began on Friday night. Husband and I got off work at our regular time. We were looking forward to going home and relaxing and preparing for our upcoming vacation. (We're headed to Alabama for the holidays to visit with husbands' family.) As we made our way home, normally a 7 mintue drive, we were stopped by a pile of traffic just two miles from the crib. The road was closed. Someone hit a utility pole and caused the transformer to be hanging in the middle of the main road. To make a long story short, I had to take the two hour trek to circle the island to get to my house.
As fate would have it, midway through our trek around the island it started pouring rain, thunder, and lightning. It was just too dangerous for us to continue. So we stop at my cousins house in Mililani..... and stayed the whole weekend. That same night, Friday, we headed to Pictures Plus to purchase photo frames to finish off my Christmas gift for my parents. The rain was coming down hard. We went out to Wal-Mart and bought clothes, ordered pizza for pick-up then headed to my cousins house. We watched some comedy shows that evening... Katt Williams, to be exact... even through all the curse words, he was still so funny! His mannerisms and jokes had me rollin'! 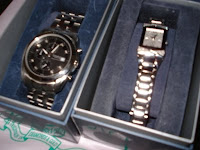 Saturday, it was still raining but we headed out on my cousins truck to do more Christmas shopping. Husband and I finally bought us watches. We were supposed to do that on our Wedding Anniversary last month, but the opportunity didn't present itself then. Husband loves his watch and so do I. The silver looks so good against his skin. We were going to buy a Wii for us and a Wii for my brother and his family but stupid Gamestop doesn't allow purchase of two Wii game systems. How dumb is that? I thought the idea was to get rid of the items. It's not like they were giving the systems at a cheaper price than their competitors. So, I opted to skip buying it from them altogether. I'll hit Best Buy sometime this week. I "heart" Best Buy! But that's another blog.

We were also able to catch a movie. The Day the Earth Stood Still, starring Keanu Reeves. It was not something I would pick to watch. Husband picked this one. The ending SUCKED THE BIG ONE! But thats alright -- it was nice to bond with my husband and cousin. We headed back to the house after that and played on my cousins Wii all night. The tennis was so much fun on that doggone machine and can be a workout at the same time.

sounds like a fun weekend!!! and yes...the wii can be so much fun!! i think we're planning on setting up the big screen for christmas so we can have a mario kart tournament. hahahaha.