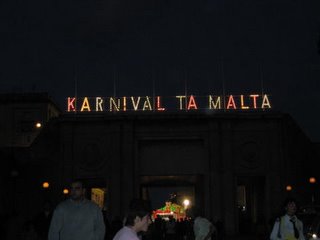 Went to a town called Valleta. They were celebrating Karnival. What I gathered from the taxi driver that took us there is that Karnival is the last celebration before the Catholic practice of lent.

The colors and the costumes were so vibrant. This was definitely NOT the mardi gras or karnival marketed to us in the United States. There weren't topless women hanging off the floats or from balconies. The atmosphere wasn't sexually charged. In fact, it was quite family-friendly. You'd see ENTIRE families dressed in costume. They'd also be drinking together. Even young children were seen sipping on a beer. I presume it is part of their culture because EVERY meal is served with wine here. 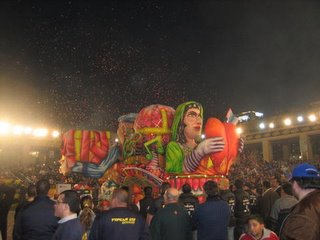 The floats were colorful and so intricate in detail. I was completely lost in a culture so unlike my own.

What I notice in the faces of the people that live here are their noses. It is the most prominent feature on the Mediterranean face. Their nose is not a wide nose as we see in Polynesia. It is skinny. Pointy. Large.

I love this place. I'm enjoying the very different lifestyle here. Life is so simple. Life has true meaning based on happiness and totally unattached to monetary success or value. 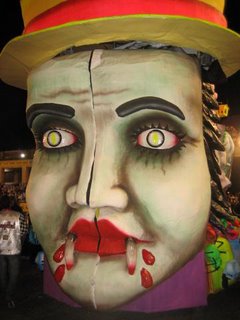 Pictured here is one of my favorite floats from karnival. This is actually the back of the float. The face opened during their presentation and dancers came out of it.

The people here LOVE the techno sound. Though I am not all that fond of that particular genre -- it's growing on me. Every single song was done techno-style. I thought it quite odd but the favorite song was "Country Road" in, of course, techno. The entire crowd, young and old were singing it.

Each an every float spewed confetti everywhere. It was gorgeous. A rainbow of colors filled the evening sky. It was absolutely spectacular.
on February 26, 2006

O, girl, you're where?? Travelling the Mediterranean?? I'm even more jealous of you than I am of SP! I've been trying to get my husband to take me on a Mediterranean cruise. One day....

Valletta? had to look that up - in Malta - southern europe? sounds exciting!

And hitting us from the road.

I am tempted to think this HAS to be a "tongue-in--cheek" piece..life in Malta has nothing to do with monetary success or value??? u got to be kidding!LOL. People here have prominent long noses cos they are constantly being exercised to sniff out the money! Of course the carnival isnt sexually charged-its not done!Hate letters get sent to the local papers when chorus girls on TV entertainment programs wear "provocative" outfits! Singing the favourite "Country Road" song just goes to show how conservative the country is. Having said all that, you enjoyed what sounds like a brief stopover in Malta because inspite of all, they are a lovely fun people. For a truly indepth satirical perspective on Malta see my blog! Cheers